What happens when you make the public school system a wing of Chicago City Hall, arguably the greatest symbol of corruption in this country's history? Answer: You end up with a toxic culture of corruption that filters down throughout the system.

The latest example has to do with the misuse (theft?) by school administrators of thousands of dollars in school-purchased gift cards that were supposed to be used as incentives to get students to come to school and take their standardized tests more seriously.

According to the IG's report:


Between January 2013 and December 2016, CPS schools, network offices and central office departments spent about $250,000 to buy 7,462 gift cards, according to the report. The cards were often bought as incentives for good student performance or attendance.

The report describes the purchase of the cards as wasteful, noting that they come at a high cost.

“Vendors that sell gift cards to CPS are essentially selling cash but they charge significant processing and service fees on top of the value of the gift cards,” the report states. “Those fees have been, on average, 18 percent markups on the gift cards purchased since January 1, 2013.”

The report also details the widespread practice of using the gift cards to “circumvent the district’s prohibition on the use of petty cash.”

As you might expect, this latest corruption scandal targeted teachers and principals only. Several were fired or reprimanded. It all reminded me of the Atlanta test cheating scandal where only African-American teachers went to prison. Top administrators pressured teaches to produce higher test scores or risk being fired paid not penalty.

In a similar vein, the IG found several “high-level” central office employees violated district policy by living outside of the city.


“The violations by high-level central office employees are particularly concerning given that CPS regularly terminates the employment of low-level employees for such violations,” the report states.


In an emailed statement, CPS spokesman Michael Passman said, officials “appreciate” the inspector general’s office for “identifying employees who have not upheld the values of our district, particularly when their actions deprive students.”

Yes you heard Passman right -- "the values of our district..." But he carefully avoids any mention of the mayor or his appointed district leaders for their roles in this latest corruption scandal or for promoting the culture of corruption at CPS. 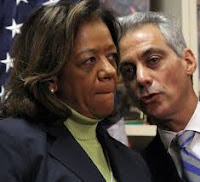 For those who've been sleeping, CPS has gone through 8 different mayor-appointed CEOs in the past 9 years. Of the last two, one is in prison on fraud and corruption charges, the second was recently forced to resign amid more corruption charges.

Nobody in the media is even questioning this basic form of bribery that lays the foundation for cheating and corruption of both educators and students. This testing madness with it's winners and losers, rewards and punishments for students, teachers and administrators, breeds corruption and cheating at every level of the system.

Why pay students or families with restaurant gift cards to come to school take tests? Who at the top, thinks this is a good idea? Where's the research to support bribery or even so-called "merit pay" as a successful education tool? And why would they think that this wouldn't lead to more corruption within the system?

Getting rid of the culture of corruption is a long, hard struggle. But the best place to start is by separating CPS from City Hall, ending this autocratic mayor's control of the schools, and establishing a democratically elected school board.
Posted by Mike Klonsky at 3:28 PM