Friday's show. What I would have asked Delia. 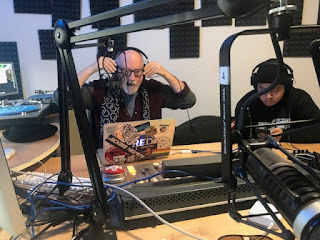 The first was watching my brother Fred's first day at the controls as producer. With a day of training under his belt, Fred sailed the Hitting Left ship successfully off to sea, proving you can teach an old dog some new tricks. Congrats bro.

Second, was having Delia Ramirez, candidate for state rep in IL Dist. 4, as our in-studio guest. She proved to be a lively and forthright guest and handled herself well under pressure (we don't do puff on HL). I came away thinking this Prosser High School alum with deep roots in the neighborhood, will make a great rep. Thanks Delia.

I regret that time ran out before I could ask her what she thought about Gov. Rauner's veto of the state's school funding bill, a measure that was designed to clear the way for a major overhaul of how the state distributes dollars to public schools.

Yes that's the very same bill that overcame Rauner's earlier veto and passed easily through the legislature back in August, with Rauner and the Republican caucus, following the lead of Madigan, Cullerton, Rahm Emanuel and the rest of the state's Democratic leadership, down the school privatization path. The trade-off for school funding for the Democrats was acceptance of the state's first school voucher program.

Under that program, individuals and corporations can give money for scholarships to private schools in exchange for a tax credit worth 75% of their donation.

Rauner not only signed the bill, but then took credit for its passage.

But now that the bill has become law, Rauner has used his amendatory power to once again veto it in a so-called "trailer bill". Weird, I know. (Can he do that, Delia?). It seems he now wants to lower the bar and include even more unvetted and unauthorized private schools in the feast at the public trough.

I wanted to get Delia's thoughts on how she as a legislator would work to resist this unethical and probably illegal assault by the governor on public education funding. But alas, time ran out and even having Fred at the control board couldn't change that.

If you missed today's show, you can listen to it here on Mixcloud.
Posted by Mike Klonsky at 7:26 PM