DeVos has turned her Office of Civil Rights into its opposite 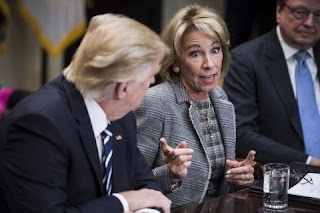 Under the direction of Betsy DeVos, the DOE has become little more than an engine for driving school privatization, religious fundamentalism, racism and gender discrimination. Trump's appointment of DeVos to oversee this country's public education system threatens a roll-back of every hard-won gain by the Civil Rights Movement in the past 70 years.

DeVos in turn, has named Candice Jackson to head the Office of Civil Rights and turned that office into its opposite. It should be renamed, the Office of Maintaining White Male Supremacy. Jackson's recent comments normalizing campus rape are but the latest indicators of the direction the DOE has taken in regards to civil rights enforcement. DeVos has also slashed OCR budget, basically neutering the office when it comes to enforcement.

DeVos claims she wants to focus on civil rights claims "individually" rather than on institutional racism and discrimination, thereby ignoring this country's legacy of slavery, Jim Crow, and racial segregation and their impact on public education.

What this means in practice is often giving equal weight to or favoring the complaints of individual white men who feel discriminated against by race-based affirmative actions; to Christian fundamentalists who feel that civil rights laws impinge on their religious practices; and to men's rights groups who feel oppressed by feminists or by women who have accused them of rape.

All has brought DeVos into direct conflict with Sen. Patty Murray, ranking member of the Senate Health, Education, Labor, and Pensions (HELP) Committee. who's among 34 Democratic senators who signed a letter which read:  "You claim to support civil rights and oppose discrimination, but your actions belie your assurances."

They gave DeVos a deadline of July 11 to provide a list of all open Office for Civil Rights cases involving a transgender student, open cases involving sexual assault or sexual harassment, and cases that have been closed or dismissed since Jan. 1. DeVos ignored the deadline.

DeVos is also being sued by IL Atty. General Lisa Madigan and 18 other state attorneys general who want the DOE to hold for-profit schools (like Trump Univ.)  accountable for unscrupulous practices/ These include lying about accreditation and job placement, and luring millions of Americans to enroll in programs that ultimately leave them trapped in a lifetime of paralyzing student loan debt.

The problem with the Dems' is that the Department under Obama's appointee, Arne Duncan, was also weak on civil rights enforcement, especially in the area of school desegregation. Duncan proclaimed that he was opposed to "forced integration" recalling memories of 1950s southern segregationists. Other appointees, like former Asst. Sec. Peter Cunningham, have been outspoken in opposition to school desegregation being a front-burner issue.

It's telling that Sen. Murray and her Democratic colleagues never mention race or racism, English language learners, or students with disabilities in any of their polemics with DeVos and confine their criticisms almost entirely to issues of gender and transgender discrimination.

A serious blind spot.
Posted by Mike Klonsky at 11:29 AM