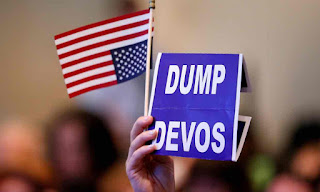 School "choice" groups have never been able to present a unified front. As with any reform movement, divisions are bound to occur and this confederation of corporate reformers and privatization advocates has long been divided around issues of class and race, charters vs. vouchers, unionization, and much more.

But since Trump's election and his appointment of Betsy DeVos as education secretary, those contradictions have burst into the open, throwing organization leaders into a state of panic as they try and keep their heavily-funded ship afloat. Many educators within the charter school networks are repulsed by Trump and don't want to be openly associated with vouchers or DeVos' attempt to privatize and Christianize the schools. And yet they still want a piece of Trump's $20B "choice" pie and a seat at DeVos' table.

According to an AP Wire story in the Detroit News:


...when a member of this elite group was elevated to education secretary, the appointment opened a philosophical schism that now threatens to shatter the alliance, turn billionaires against each other and possibly lead some school-choice advocates to join with teachers’ unions, their archenemies.


...dozens of charter school leaders met in Washington, D.C., last week, just blocks from the U.S. Capitol, to discuss a number of pressing issues facing the charter sector – chief among them, how to navigate the politically thorny situation of opposing much of the Trump administration’s agenda despite that agenda including the expansion of charter schools.

The closed-door, off-the-record meeting, confirmed to U.S. News by several sources, comes at a precarious time for the charter sector and the broader school choice movement on the whole.

The current political landscape presents a particular quagmire for charter school advocates: The budget included $168 million boost to expand charter schools and a $1 billion boost to Title I that their schools could benefit from, but was rife with cuts to other programs deemed essential for the majority of students their schools serve. The budget also included $250 million for a private school voucher program, which, paired with increased visibility for private choice programs thanks to DeVos, some charter advocates see as a threat.

Yesterday, Trump brought a number of  school "choice" groups to the White House in an effort to consolidate his base among ed reformers. DeVos and other White House officials reportedly attended.


The purpose of the meeting is unclear. Aside from President Donald Trump’s budget proposal — which would invest $1.4 billion into public school choice, charter schools and private school vouchers — the Trump administration has yet to unveil a plan to completely fulfill its $20 billion campaign pledge to expand school choice. And the many groups interested in that goal are at odds over just how to get it done. The White House declined to comment about the meeting and the Education Department didn’t respond to a request for comment.

The purpose seems clear enough to me. Dangling $20B (which comes right out of the public education budget) over the heads of school "choice" groups may be enough to, at least temporarily. quiet dissension in the ranks. That approach certainly worked for the pro-"choice" muscle philanthropies like Gates, Broad, and Walton during the Obama administration. Arne Duncan's DOE also threatened the loss of federal dollars to keep states and school districts in line with his own "choice" agenda, ie. Race To The Top.

One of the common threads holding "choice" and charter groups together until now, has been a disdain for teacher unions. But now, an energized union organizing drive among charter school teachers seems to be taking hold. The initial promise of charters included more autonomy and empowerment for teachers. But as large networks of charters are increasingly run by corporate-style boards with no teacher representation, charter teachers find themselves feeling more like delivery clerks of a pre-packaged curriculum. Without collective bargaining rights, they find themselves working for lower pay, without job protection, and minimal health care or retirement plans.

Chicago, according to a Tribune report, has become the "epicenter" of charter school unionization. After a weeklong vote inside dozens of local charters, ChiACTS Local 4343 announced late Friday that 84% of its voting members are in favor of unifying with the 28,000-member CTU.

The proposed merger could well be an omen of things to come nationally. What I like most about it, is that teacher unions are recovering their own purpose for being-- to organize the unorganized.


“This vote for unification is a vote for educators with both ChiACTS and the CTU to speak with a stronger collaborative voice for real educational justice for all of our students,” ChiACTS President Chris Baehrend said in a statement. “It is our identity as public educators – not our employers – that defines us, and our overwhelming vote for unity affirms that charter educators are educators first, and servants of the public with a shared commitment to the futures of our students across the city.” 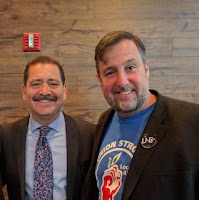 Chris Baehrend and the CTU's Stacy Davis Gates will be our in-studio guests Friday, 11-noon on Hitting Left radio, talking charter school unions, school closings and... Tune into to WLPN, 105.5 FM, streaming live at Lumpen Radio or download the podcast.