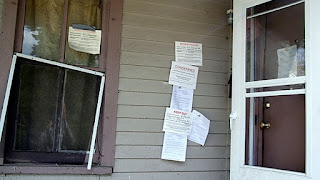 UNEMPLOYMENT AND DISINVESTMENT by the city and its corporations are destroying neighborhoods and pushing thousands of African-American families out of Chicago and other big cities. Some call it "reverse migration" but the net effect is the whitenizing or gentrification of the cities.

Another driving force behind this push-out of black and poor from the city, is Mayor Rahm Emanuel's capital investment plan and his closing of schools, mental health facilities, and other city services. While investment-starved neighborhoods suffer, Rahm has pumped millions into ill-conceived projects like the new DePaul basketball arena.  Rahm's policies have further isolated, destabilized and blighted south and west-side neighborhoods, creating conditions for more crime and violence. Whole neighborhoods are now marked by boarded-up homes, stores and schools as thousands of families lose homes to foreclosure.

An article in Monday's Reader calls Chicago's South Shore neighborhood, "the eviction capital" of the county. Real estate owners and management companies like Pangea and Kass are doing most of the evicting. Last year, Pangea filed more than 1,000 eviction cases, usually also seeking back rent, and won about 60 percent of them.

"If you want to know Pangea's ambitions, they named themselves after the ancient supercontinent," says Mark Swartz, director of the Lawyers' Committee for Better Housing. "They are buying up the south side."

"The issue is unemployment, and lack of investment by the city and by companies," says alderman Leslie Hairston, whose Fifth Ward includes parts of northern South Shore. Though she says she doesn't hear much about evictions from her constituents, she wasn't surprised to learn about the higher-than-average eviction rate in South Shore. "You look at the number of people working two, three jobs just to try to make ends meet—it's challenging," she says.

Impact on education...The next time you hear Rahm or schools chief Claypool boasting about rising standardized test scores or graduation rates, consider how these jumps (if they are to be believed) correspond to the loss of CPS enrollment, especially on the part of poor and black students.