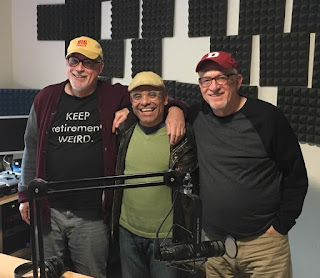 Jose Rico joins us for conversation about Chicago schools and immigration tomorrow on Hitting Left with the Klonsky Brothers at 11AM 105.5 FM in Chicago, www.lumpenradio.com. live streamed around the galaxy. Jose was part of the board's Latino Advisory Committee that resigned in mass in February to protest inequitable cuts in the budget.

I'll also be interviewing Larry Miller who, along with a slate of progressives, won his election to the Milwaukee school board last week. The slate, backed by the Working Families Party, defeated the well-financed campaigns of some of their opponents by relying on grass-roots organizing. They are committed to rolling back vouchers and other Betsy Devos privatization initiatives.

Another great show. You would be crazy to miss it.
Posted by Mike Klonsky at 5:26 AM