What did Rahm and DeVos meet about? No one seems to know. 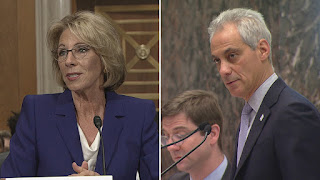 Rahm Emanuel met with Betsy DeVos a week ago. But we still don't know what the meeting was about.Why not?

All we saw was this cryptic press release from the D.O.E.:

The Secretary and Mayor had a wide ranging discussion on Chicago’s education system, rising graduation rate and the Mayor’s reform plans.

The Secretary thanked the Mayor for visiting the Department and for sharing his thoughts, and issued the following statement:

“I want to thank Mayor Emanuel for today’s conversation and for sharing his vision for education in the city of Chicago. I look forward to continuing to find ways in which the Department can work with the Mayor’s office to ensure the students of Chicago receive access to the highest quality education possible. I applaud the Mayor for Chicago’s rising high school graduation rates and commitment to providing more students new opportunities through dual enrollment programs."

Not a word in the Chicago media. Near total blackout...except for this from Chicago Tonight:


A request for comment from Emanuel's office was not immediately returned. Chicago Public Schools declined comment on the meeting, but did note its dual enrollment program has grown from 15 schools up to 60 over the past five years and currently serves more than 4,200 district students.

Not even a word about privately-run charters? And dual enrollment? That's it?  Sounds like both were afraid to get to close to each other in public.

Putin/Trump syndrome.
Posted by Mike Klonsky at 5:35 AM