Bernie has the right line. Keep the heat on Clinton. 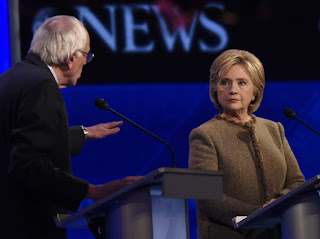 “I will be vigorously in opposition, and I will make that very clear.” -- Sen. Bernie Sanders

Bernie Sanders just gave his millennial supporters (and the rest of us) the best reason not to stay home on election day. He wants us to be part of the movement that defeats Trump and elects Clinton so he and we can become "be the thorn in her side" after Nov. 8th.

It's the thorn that went missing after Obama's historic victory in 2008 when the anti-war and other progressive movements, active during the Bush administration, went to sleep. Many even thought the election of our first African-American president marked the start of the "post-racial" era.

In an interview with the Washington Post on Monday, Sanders made clear that, if she wins the presidency Nov. 8, Clinton will have to contend not only with Republicans who oppose her agenda but also with progressives who were not excited by her campaign and have long feared that she plans to govern as a centrist, in partnership with her new-found friends among the neocons.


“We won 22 states and 46 percent of the pledged delegates, 13.4 million votes . . .and a majority of the younger people, the future of the country. . . . That gives me a lot of leverage, leverage that I intend to use.”

He laid out his post-election strategy and said the he and other senators, including those who will ride the anti-Trump wave into office, have already started plotting legislation that would achieve many of the proposals that fueled his insurgent run for president, including a $15 federal minimum wage, tuition-free public college, an end to “mass incarceration” and aggressive steps to fight climate change.

The senators, Sanders said, also plan to push for the breakup of “too big to fail” banks and to pressure Clinton to appoint liberals to key Cabinet positions, including treasury secretary. Sanders said he would not stay silent if Clinton nominated the “same old, same old Wall Street guys” to regulatory positions that are important in enacting and overseeing the financial policies he supports.

Sanders said that his office and others have started converting the party platform into draft legislation. He said the lawmakers “informally” working with him include Sens. Elizabeth Warren (D-Mass.) — who campaigned with Clinton on Monday in New Hampshire — Sherrod Brown (D-Ohio) and Jeff Merkley (D-Ore.).

That's hopeful news for education activists who fought for and won the most progressive education plank ever in a party platform, including a strong statement on over-testing, support for Opt-Out parents, and opposition to for-profit charter schools.

Sanders has also got to keep the heat on Clinton to finally speak out against the Dakota Access Pipeline and the wave of repression being used against protesters in Standing Rock. The party platform is clear in its support for, "the inherent sovereignty of Indian nations" and its commitment to the right of all tribes to protect their lands, air, and waters".

However the Clinton campaign's pre-election day response continues to be one of tipping a hat to the Sanders movement while also bending towards her neocon allies.


“It’s not good enough for me, or anybody, to say, ‘Well, look, Republicans control the House: From Day One, we’re going to have to compromise,’ ” Sanders said. “The Democratic Party, before they start compromising, has got to rally the American people around our ideas and make it clear that if Republicans do not go along with reasonable ideas to benefit the middle class and the working class, they are going to pay a very heavy political price.”