On our way to Cannonball 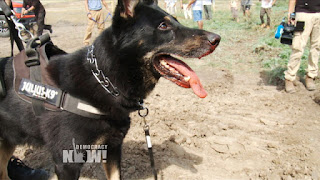 Watching Democracy Now's footage of hired company thugs from the Dakota Access pipeline company, sicking their dogs on peaceful Lakota pipeline protesters was a bit much for us to stomach. Brings back memories of Alabama, 1962.

So we're packing up the car this morning with warm clothing and food and driving up to Cannonball, N.D. from Chicago, to see how we can help offer support and solidarity with the Standing Rock Sioux and thousands of activists who've been at the encampment for months.

This is not just about helping others. The $3.8 billion Dakota Access Pipeline, which poses a clear and present danger to the environment and especially to the drinking water of 90 million people, empties out its fracking oil here in Illinois. The N.D. protests have an immediate aim of stopping the company and the Army Corps of Engineers (the folks who helped bring deadly flooding to the Lower 9th Ward after Katrina) from putting the pipeline under the Missouri River on reservation land. After that comes the Mississippi. A leak into either river will produce another oil catastrophe. 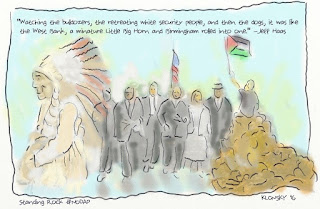 I'm especially interested in seeing the work of educators who've been volunteering in the camp's impromptu schools. Shades of Mississippi Freedom Schools?

There will be a solidarity rally at Daley Plaza in Chicago at 4 p.m. on Friday. Spread the word.

SOME GOOD NEWS. Yesterday, the Obama administration announced its support for the pending restraining order against DAPL. Last year, they stopped the Keystone XL portion of the pipeline, which would have piped in oil from Canada.


The U.S. Army Corps of Engineers hasn't changed its position in the underlying lawsuit, which was filed by the Standing Rock Sioux Tribe. The agency still believes it fulfilled its duty to consult with the tribe about the impacts of the controversial pipeline on cultural and historic sites.

However, since the matter remains of great public interest, the Obama administration believes a temporary restraining order is warranted against Dakota Access LLC, the Department of Justice said in a court filing on Monday.

Special thanks for orientation and travel tips to Standing Rock encampment, to friend Nick Estes, a Lower Brule Sioux from South Dakota, who's here in Chicago this month, working on his doctorate.

Email ThisBlogThis!Share to TwitterShare to FacebookShare to Pinterest
Labels: Pipeline