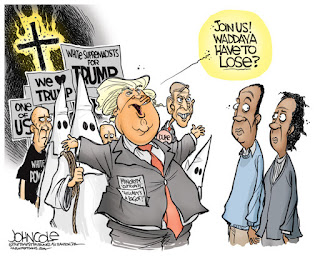 
"Public officials have a responsibility not just to a small subset of children but to all of the children, to make sure that they receive a first-rate education," Mass Live


"African-Americans will vote for me after Dwyane Wade's cousin killed in shooting." -- Politico

They’re not defending the indefensible Trump but accusing me of being in the tank for Clinton. And I do support Clinton — but only in the sense that I would support a ham sandwich for president if it were the only thing standing between Trump and the Oval Office. -- Washington Post


When you go to war... you try to identify the enemy. The enemy right now, the overwhelming majority of people coming in, are people of color or people of hispanic origin." -- Tribune

"Vouchers: You don't just resegregate bodies, you resegregate budgets, curriculum, & political will to do anything" pic.twitter.com/fIo5IPFDCM
— No Takeover of MPS! (@NoMPSTakeover) August 27, 2016

Dwyane Wade's cousin was just shot and killed walking her baby in Chicago. Just what I have been saying. African-Americans will VOTE TRUMP!
— Donald J. Trump (@realDonaldTrump) August 27, 2016