Will a Clinton administration bring a shift in federal education policy? Will we see a break from corporate-style reform practices--racing to the top, no child left behind, testing madness, school closings and the unfettered move to privately-run charter schools that marked the Obama/Duncan era? We can only guess right now.

Recent Clinton speeches to the teacher union conventions sounded good. But we've all been there before. The new party platform plank on education reflects some positive changes pushed mainly by Sanders members of the platform committee. But platforms are soon forgotten once November is in the rear view.

The latest indicator that change may be in the wind comes from a new report from a bipartisan group of state legislators who studied and were impressed by the most successful approaches in Finland and other developed countries. "No Time to Lose: How to Build a World-Class Education System State by State’.

The 28 legislators and staff members focused on the highest performing countries on PISA to discover commonalities across their policies and practices. They met with education leaders from these countries, along with national and international experts who study their systems. They also visited several countries to see the differences firsthand.

I read the report with a skeptical eye, especially after I saw AFT President and Clinton cheerleader-in-chief Randi Weingarten giving it a giddy endorsement, calling the report "a model" and claiming that "the committee sets aside political ideologies to work together for what’s best for students and educators."

AFT is listed as a partner on the project though it appears, after scanning the list of partners and consultants, that no k-12 educators were involved in creating he report. So no, Randi -- not a "model". 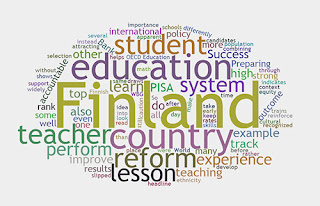 Actually, the report does represent a step up from where we've been for the past three decades since A Nation at Risk" set us on our current destructive course. In some ways, both documents are similar with each taking globalism and the race for American supremacy as its starting point. The new report is filled with much of the same empty reformy rhetoric about our failing schools and the need for "world standards" and "alignment."


“In several of the countries studied, teaching is regarded as an honorable and respected profession, comparable to medicine and law, and not a burden on the local property tax.” — State Representative Mary Stuart Gile, -- D-N.H.

On the positive side, the report contains no mention of standardized testing, school choice, charter schools or privatization in its list of recommendations. Instead it calls for "a strong early education system, a re-imagined and professionalized teacher workforce [I sensed Linda Darling-Hammond's presence here], robust career and technical education programs, and a comprehensive, aligned system of education."

Most importantly, there was a strong statement on the effects of poverty as a key determinant in student academic success.


In the United States, children in poverty now account for about a quarter of all children in public schools. Large numbers of American children enter first grade with disadvantages that may overwhelm the school’s capacity to provide an adequate education. Because high-performing countries provide supports to ensure that children are ready for school, their schools typically do not face similar challenges.

Once students in top-performing countries are in school, those who struggle receive extra help to reach the same high standards other students will reach more easily. Providing additional resources to schools serving disadvantaged, struggling students is a priority.

More teachers are typically allocated to such schools, with the best teachers serving in the most challenged ones. Resources are also reallocated within schools to reach those most in need of extra support. These countries demonstrate that, with added support, struggling students can meet high expectations. Inversely, American students from the wealthiest communities are most likely to get the best teachers and the finest facilities because of the way we structure our finance systems.

A far cry from the reformers' current "no excuses" rhetoric.

The report takes notice of Finland's focus on equity:


Finland prides itself on providing equity of opportunity to learn and inclusion. Resources are directed to the most high-need students and schools. Students with special needs are often mainstreamed in regular classrooms but receive significant additional support. Ninety-eight percent of the cost of education is covered by government.

However, no mention of the effects of race, racism or segregation. The word, unions, appears only once in the report. This, despite the fact that most of the countries investigated have a strong unionized teacher force. But the one reference is positive, a recommendation that unions have a seat at the reform table. No wonder Randi is so enthusiastic.

How much influence "No Time To Lose" will have is anyone's guess. With the passage of ESSA and the weakened federal role in influencing state ed policy -- in part, a backlash against Duncan's overreach, Common Core and Race To The Top -- it's doubtful that this report will have much weight in red states.

Unless of course, the Republican crisis that is Trumpism, turns many of them blue or at least purple.
Posted by Mike Klonsky at 1:53 PM