What Junior forgot to mention about Chicago gun violence 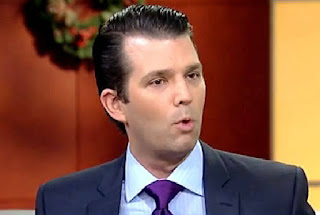 D.T. Junior had so much oil on his head last night, Dad was worried the stage lights might ignite him. And wouldn't that be tragic on top of everything else, Melania-gate and all?

Looking for some easy claps from the convention's dwindling gaggle of racist Trump sycophants, Junior called out Chicago, cynically using the rising death toll that gun violence has taken in the city's black and Latino neighborhoods to make his case against any and all gun control legislation.


"Just look at how effective those laws have been in inner-city Chicago, a city with the toughest gun laws in our nation, where 70 people were murdered last month alone and where over 3,400 American lives have been lost since this administration took office in 2009."

No Junior. Chicago doesn't have the toughest gun laws in the country.

But I'll give him a point for trying. He's right that local gun laws alone don't do much to stop the shootings. They may save a life now and then. Not a bad thing.

But the reasons for the city's pandemic gun violence are complex. They are rooted in institutionalized racism, poverty, joblessness, school closings leading to more blight, worsening post-industrial socio-economic conditions, feelings of despair and anger, and neighborhood segregation and isolation. Add easy access to guns and a competitive, largely unfettered drug market and you get Chiraqs.

But Democrats can't blame all this on the Republicans.

Junior could have mentioned that IL's concealed-carry law was struck down by the court back in 2012. And it's all but impossible to get any laws with teeth passed in the legislature for fear of being taken out with NRA money.

While buying a gun inside the city limits may be slightly more difficult for some, all they have to do is drive across the Indiana line into Gov. Pence territory, for one of the largest gun buffets in the country. Everything from Saturday Night Specials to heavy artillery is there for the taking.

Almost 60% of the guns used to commit a crime in Chicago are first bought in states like Indiana, Wisconsin and Mississippi, Those states do not require background checks for gun sales at shows or over the Internet.

Oil-Can Trump could have scored big points against Mayor Rahm Emanuel by pointing out how he, as Pres. Obama's chief of staff, put the kibosh on every attempt to pass national gun control legislation. Remember in 2009, when Rahm told Atty. Gen. Holder to STFU on gun control?

But national gun laws would have cramped gun sales in V.P candidate Pence's home state and so many others controlled by Republicans and the NRA. So Junior was left with nothing but a few claps.