Moral 'defibrillators' battle for the soul of the party. 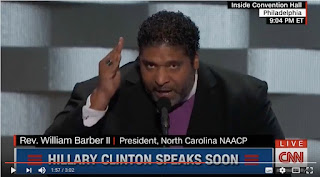 "In this season, when some want to harden and stop the heart of our democracy, we are being called like our foremothers and fathers to be the moral defibrillators of our time." --Rev. William Barber

The two most important speeches at the DNC last night were barely covered in this morning's reportage. They came from Rev. William Barber and Gen. John Allen and represented for me, at least, the poles in the struggle for the soul of the Democratic Party and the nation.

Rev. Barber is the head of the N.A.A.C.P and leader of the Moral Monday movement in North Carolina. MMM is a multi-racial movement which has mobilized tens of thousands in this important swing state, to fight form civil rights, public education and social justice. It could hold the key to a Clinton victory in November.

Barber took to the moral high ground, bringing down the house with his call for shocking the system.

Gen. Allen, who battled Pres. Obama over the draw-down of American troops from Iraq and Afghanistan, was obviously brought out and scripted to help cut into Trump's base. His speech was also intended to shore up Clinton's hawkish image as someone who could be trusted (by the Pentagon) to lead the next 8 years of the global war on terror and keep tax dollars flowing into the war machine.

Marching out onto the stage with lots of military brass behind him, Allen worked the crowd into a patriotic frenzy. His speech stressed US military power around the world. It could have easily been cribbed from Trump's. The experts who exposed Melania's plagiarism should check this one out.

No details as to how.

Liberals loved it. At least, these did.


Wargasm...The image from last night that will stay with me always came from the thousands of delegates chanting, "USA, USA..." to drown out the handful of protesters who had the courage to shout "No more war." The scene had all the makings of a Trump rally and showed how quickly things can turn at the hand of a skillful, flag-waving, fist-shaking demagogue.

No there there on ed...I listened hard this week for any clues or indications of the rumored break by Dem leaders with the party's current corporate-style school reform policies; i.e. testing madness, privatization, mass school closings, and expansion of privately-run charters. I heard nothing. In fact, I barely heard any specifics at all about education and what we can expect from a Hillary-run D.O.E. Dems obviously don't see this as a big dividing issue with Trump/Pence.

The word education came up only twice in Clinton's speech last night. Both times in reference to her taking credit (deservedly or not) for children with disabilities having greater access to quality education. No speaker -- certainly no educator or union leader -- was given the podium in prime time to talk about the fight for public education or differences with Trump on this issue. (Yes, I know Randi and Lily and a few union guys were given barely-noticeable speaking slots.)

What a great alternative that would have offered us, in place of Gen. Allen's wargasm.
Posted by Mike Klonsky at 12:14 PM