Hunger strikers say: It's not over 'til it's over.

"We need to unpack this," said Jitu Brown of the Kenwood Oakland Community Organization, one of about a dozen activists who began a hunger strike Aug. 17. "But I think they have underestimated our resolve." -- Chicago Tribune

There's no doubt about that or about the fact that the Dyett hunger strikers scored an important victory yesterday when Rahm was forced to do a complete 180 and accept their demand for an open enrollment high school for Bronzeville. But if the mayor and Forrest Claypool thought the strikers would go home and end the struggle here, they were mistaken.

From the beginning, the Coalition to Revitalize Dyett made it clear that their fight was about something much larger than just opening a school.

Remember, CPS leaders already had a school at Dyett and intentionally ran it into the ground as part of their planned neighborhood gentrification. To just let them have it back; to let them make all the important leadership and curriculum decisions as they had done before, with no community input would be a hollow victory.

Hunger strikers Jitu Brown and April Stogner had not even returned from their D.C. meeting with Arne Duncan, Randi Weingarten and Lily Eskelsen García when the announcement came down that Dyett would be opened as an "arts school". What duplicity, coming from a leadership that has for years, diminished and de-funded arts education throughout the Chicago school system.

There's been no report yet on what was discussed or resolved in D.C. with Duncan.

Catalyst quotes Brown on his return to Chicago:


“We are happy the school is opening as a neighborhood CPS-run school,” says Jitu Brown, a longtime activist with the Kenwood Oakland Community Organization (KOCO) and one of the 12 hunger strikers. “All is not lost. But what we want is what the community demanded.” 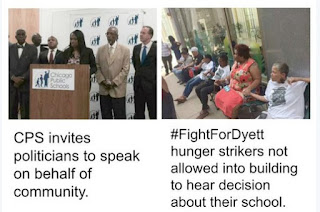 Invited to the CPS press conference were a handful of local pols who had done nothing to support the hunger strike. To make matters worse, the hunger strikers were locked out of the conference altogether -- Rahm's revenge for getting run out of his own budget hearing by protesters, the night before.

Jackson, who a day earlier had given all the reasons why no new school would never be allowed in Dyett -- too many under-enrolled schools in the area; we don't want schools competing for students -- now was proclaiming a "victory" for the community.


"We should see this as a win for the community, because after all, the request was for an open-enrollment high school that gives access to the children in the community which they so truly deserve," she said, portraying the decision as a resolution to the debate.

Then came the kicker:


Jackson said, adding that the district will identify and install a principal for the school "immediately," someone who will be responsible for community outreach and building out the new school. "We believe that this is the best resolution, and the best solution to meet the demand," Jackson said.

Then came Claypool to explain the 180 turnabout. Earlier, he argued that the school would have trouble attracting enough students to keep it sustainable without harming enrollment at neighboring schools. On Thursday, the very same Claypool, showing amazing agility, said the district's proposal would be sustainable.


"Dyett may have been closed before for under-enrollment and poor performance, but we believe with this concept we're going to have good enrollment and without in any way hurting the other schools in the area that are struggling with enrollment issues."

Brown on Friday announced today that the group will continue to fight for their demands, including green technology and global leadership in its curriculum; a ‘sustainable school village’ with a coalition of local school councils; for the school to be open until 8 p.m. every day with programs created by the community; an immediate publicly elected local school council; and at least six members of their coalition part of their design plans. The demands also include a voice in the hiring of the new principal.

The group has named Duane Turner as their pick. Turner is a former CPS teacher and principal who lives three blocks from Dyett and helped put the Green Tech proposal together.

Jitu Brown summed it up this way:

I think there will be now.
Posted by Mike Klonsky at 9:33 PM