The latest UNO scandal represents a potential disaster for the thousands of mainly Latino students and parents enrolled in Chicago charter schools. It should also put an end to claims that privately-run charters are truly "public schools"

For those who haven't been following, there's been a split between the scandal-plagued United Neighborhood Organization (UNO) and the charter school chain it founded. Now UNO is threatening to force closure of six of those charters, potentially leaving parents and teachers scrambling to find a new school for thousands of children come next fall.

UNO claims that the separately incorporated UNO Charter School Network owes them $3 million in management fees. The schools are said to be withholding payments to UNO because of lack of transparency about how the millions are being spent and also because UNO is currently the target of ongoing federal investigations.

UNO is threatening to sell all four school buildings it owns-- buildings that are home to six schools-- unless the charter network pays up. UNO CEO Rick Cerda says that conflicts between his group and the charter chain “raise a question as to whether the UCSN schools will continue to operate as they do today.”

It's hard to know how much of this is bluff or what UNO would be able to do with those empty buildings. But CPS has plenty of space to house those six schools now that it is sitting on dozens of empty school buildings of its own.

Imagine the power this clout-heavy, private group has over neighborhood parents, teachers, and children through its virtual ownership of their supposedly "public" schools.

Cerda never mentions that his  group only owns those schools because of a $98 million construction grant for the projects which was greased by Illinois House Speaker Mike Madigan, Alderman Eddie Burke, former Gov. Quinn and Mayor Emanuel. The huge state grant was blocked temporarily by Quinn when the feds came in, and then released again by Quinn under pressure from Madigan. This despite flagrant nepotism, conflicts of interest, and a Securities and Exchange Commission (SEC) investigation that has already led to a few cosmetic changes at the top and the fall of UNO big-dog Juan Rangel (the co-chair of Rahm Emanuel's first campaign for mayor in 2011). In 2011, UNO received $37.5 million in state-backed loans.

Meanwhile, the school network was handing out its own contracts to more familiar names. Monterrey Security, a firm that was previously co-owned by Alderman Danny Solis’s brother Santiago, won a $75,000 security contract. 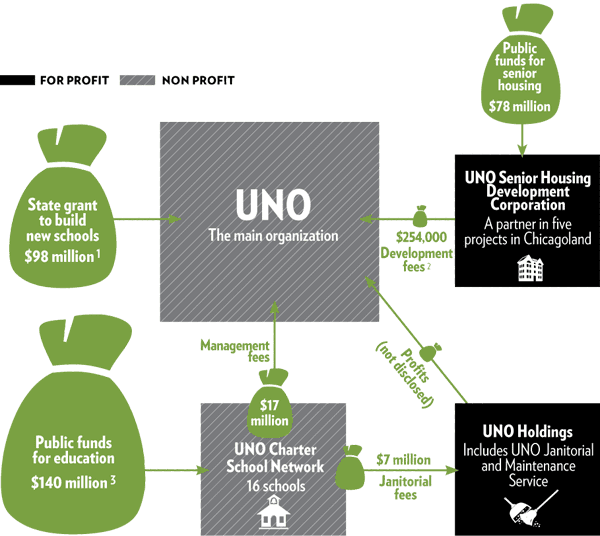 Among other charges against UNO was its failure  to make pension contributions for more than 90 certified teachers in its charter schools. So far the federal investigators have failed to produce any indictments although they did help pull the city's bond rating down close to minus. Not that it needed any help in that area.

CPS oversees UNO's charter and provides funding support. It's the largest charter school operator in the state. But UNO has carried a BBB-minus rating from Standard & Poor's, the lowest investment grade level.

It's hard for most to even imagine the power this private group has over neighborhood parents, teachers and children through its virtual ownership of their supposedly "public" schools. But this is exactly what corporate school reformers envisioned when they promoted unrestricted expansion of privately-run charters through mayoral control of the schools and closing schools as accountability and cost-saving strategies.
Posted by Mike Klonsky at 11:09 AM