Garcia and Fioretti working the neighborhoods to challenge Mayor 1% 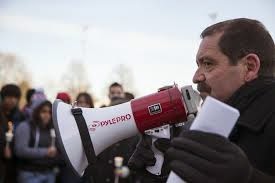 Don't miss Curtis Black's excellent piece today in the Chicago Reporter, "Mayoral candidates drum up community spirit." Black focuses on the efforts of Rahm's two top contenders, "Chuy" Garcia and Bob Fioretti, as they work the neighborhoods, trying hard to pick up the grassroots support they need to keep Mayor 1% under 50% and send February's election into a run-off.

Black shows "Chuy" picking up the endorsement of a new activist group in Bronzeville, People United for Action. A huge turnout for him from the African-American community will be essential for him to have any hope for victory.

Fioretti is seen working South Chicago -- not too far from the neighborhood where he grew up, Roseland — to support the Alliance of the South East and the Coalition for a Lakeside CBA, pushing for a community benefits agreement from the developers of the vast tract that once held U.S. Steel’s South Works.


Emanuel has been a protest magnet throughout his administration, beginning with his closing of six mental health clinics.  Add the NATO summit, the teachers strike, the school closings and various other mayoral actions, and it’s undeniable that he has done much to energize the labor-community movement that demands new priorities for the city.

Under Emanuel, “we get school closings, we get speed cameras all over the place, our residents are being nickled and dimed to death, we’re forced to pay higher property taxes,” said protest organizer Rebecca Martinez.  “And yet the poverty rate has gone up under this administration.  Downtown continues to progress and our neighborhoods continue to go down.” 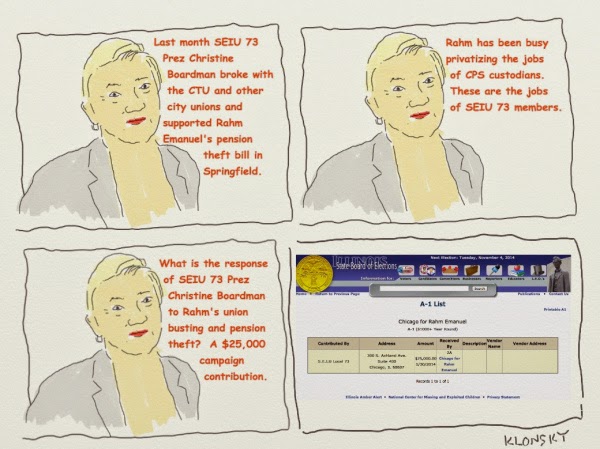 PRO-BONO,,, I've given my brother the number of my distinguished attorneys at Pro, Bono & Plead as I'm expecting SEIU 73's sell-out leader Christine Boardman to threaten him, as she did me, with lawsuits, if he keeps up his blog exposures. See his latest (with cartoon) here.
Posted by Mike Klonsky at 10:36 AM