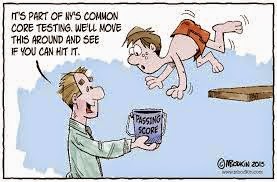 Regardless of what goes on in the classroom, the new Common Core tests have cut-off scores designed to anticipate the failure of more than half of those tested. It's all too predictable.

Because the tests are high-stakes, the arbitrary cut-off scores set by the two main state consortia could have devastating effects on graduation rates, college admissions, teacher evaluations, and even the survival of neighborhood schools.


In a move likely to cause political and academic stress in many states, a consortium that is designing assessments for the Common Core State Standards released data Monday projecting that more than half of students will fall short of the marks that connote grade-level skills on its tests of English/language arts and mathematics.

One participant said that when the standard-setting panelists saw the data projecting how many students would fall short of proficiency marks with their recommended cut scores, “there were some pretty large concerns. And it was very evident that this was going to be a problem from a political perspective.”