I found some of the disappeared school-closing kids 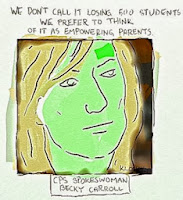 Almost half the youngsters most affected by Mayor Rahm Emanuel's school shutdowns did not enroll this fall in the new schools where officials planned for them to go. Hundreds of them are MIA.

CPS spent $233 million preparing "welcoming schools" to receive thousands of new students who never came, and millions more on "Safe Passage" routes after shuttering 50 other schools on the south and west sides. But only about 60% of the displaced students have shown up at the receiving schools. After initially over-reporting the actual numbers in the consolidated schools, CPS leaders admitted  they had no idea where hundreds of former students have gone.

I was at a south suburban elementary school yesterday with classrooms bursting with 32 students in the lower grades. I was told by administrators that lots of these kids were Chicago transplants, newly arrived from Chicago's closed schools.

CPS Liar-in-Chief Becky Carroll would have us believe that the thousands of no-shows is a good thing because closing neighborhood schools "empowers" parents to find new schools for their kids. But what does it mean for the city if school closings and other City Hall actions are forcing hundreds of African-American families out of the city and into poor, isolated and re-segregated black suburbs?

Severe budget cuts in city schools and city services, the closing of neighborhood schools and health clinics, growing food deserts, the replacement of good-paying union jobs with sub-living-wage service and retail jobs, and pandemic gun violence, are all making the city an impossible place for many poor and black families to live. That's got to change. We've got to Take Back Chicago beginning with City Hall.

It's about time. The SEC is in town investigating possible securities violations involving the state’s largest charter-school operator, the machine-connected United Neighborhood Organization. But remember, UNO could never have pulled off its $98 million scam without the help of Eddie Burke, Michael Madigan, Gov. Quinn and Mayor 1% himself.

Burke, a major Quinn campaign fund-raiser, had urged the governor to restore UNO's funding after it was temporarily halted when the scandal first broke. The SEC also demanded documents regarding UNO from the Quinn administration’s Department of Commerce and Economic Opportunity-the agency overseeing the group’s school-building grant. So far, the state has given UNO $83 million of the promised $98 million.

Juan Rangel, UNO’s $250,000-a-year chief executive officer, was Rahm’s campaign co-chairman in 2011 and also has close ties to House Speaker Madigan. These guys may be too big to jail but once the federal investigations begin, there's no telling how things will unravel or how high up they will go.

Interesting that UNO has hired ASGK, the PR firm founded by Rahm's pal David Axelrod, to come in and try and clean up Rangel's mess.

For starters, UNO should have its charter revoked and their schools should be either taken under CPS control or handed over to a non-criminal enterprise to run.