Classic Rahm. He pushes the envelope on First Amendment rights and then pulls back in the face of protest.

The Sun-Times reports, he canceled plans to dramatically increase fines for resisting arrest to appease aldermen and protesters concerned he was trampling First Amendment rights in the name of securing the NATO and G-8 summits. But I suspect there were some phone calls made from White House. This is an election year and the last thing Dems need is a repeat of '68 Chicago police riot which marked the beginning of the end for the old Daley machine as well as for Hubert Humphrey's presidential candidacy.

Funniest quote of the day came from top cop Garry McCarthy who claimed that the concessions shows that City Hall is “listening to the voice of the people.”

Meanwhile, neighborhood protests against Rahm's school closings continued on MLK Day. SOS Chicago's Bob George reports from the Marquette Park neighborhood where a little more than 45 years ago Dr Martin Luther King marched through the Same Park for fair and open housing. Dr King said of this march that he encountered the most hostile crowds he had in his entire career. 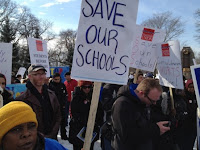 
I attended the March and Rally at Marquette Elementary school on Chicago's South Side on Martin Luther King Day, [organized by the Chicago Teachers Union and community groups]. Chicago Public Schools have targeted Marquette for Turnaround Parents Students , Teachers and the community are fighting this privatization move to have AUSL a non-profit turnaround take over in 2013. Today CPS turns a blind eye on the needs of this same community.

Approximately 250 Parents Students , Teachers and the community members rallied at Marquette Elementary School and then marched in Dr King's steps then rallied at Marquette Park to hear speeches from parents, youth leaders, ministers and union leader Karen Lewis. The last leg of the march was to a home of an 8-year-old boy who had recently been murdered where we joined in prayer for Peace and Justice. We chanted Whose Schools Our Schools , Save Our Schools and sang We shall Overcome with added lyrics of We shall Save Our Schools someday.