Police reform? Where is it? 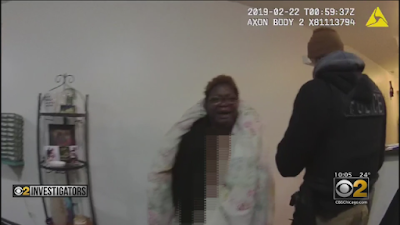 The Anjanette Young case is one more brick-in-the-wall story about a racist political system. It's a system that reproduces racial inequality, criminalizes and incarcerates Black people, allows cops to "legally" bust down doors and invade homes in the middle of the night, abuse, and even kill women like Young and Breonna Taylor.
The raid occurred nearly two years ago when CPD cops broke into the home of Young, a social worker who was undressing when they barged in looking for a suspect. Young, standing naked and handcuffed, cried repeatedly that the officers had the wrong address.

So now the city's council has "resigned". The former police chief has been fired and Mayor Lightfoot is rightfully taking heat for her mishandling of the aftermath.

But Mayor Emanuel, on whose watch this racist assault took place, is up for a Biden cabinet position, and the CPD perpetrators are still on the job, and with easy warrants obtained via informants' misinfo, are still breaking down doors.

Meanwhile... The head of Chicago's FOP, who calls Muslims "savages" and says "they all deserve a bullet..."  He's still on the city payroll.
Posted by Mike Klonsky at 1:06 PM