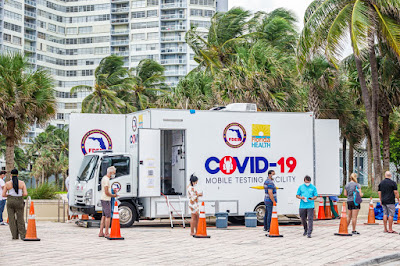 More than 13.4 million people in the country have been infected with the novel coronavirus and 267,306 have died as of 2:30 p.m. Monday, according to Johns Hopkins University’s COVID-19 dashboard.

Hundreds of people on Wednesday night — including members of the right-wing group Proud Boys — protested the closure of a Staten Island bar that ignored COVID-19 restrictions.-- NY Post

As I'm reading the news today about Florida nearing one million COVID cases, I'm recalling a column written back in May by former Tribune writer Dennis Byrne announcing to anyone who cared that he was abandoning Chitown for the wild and wide-open climes of Florida. He'd had enough of being told to wear a mask or wash his hands. He definitely didn't like Mayor Lightfoot and Gov. Pritzker telling him that he couldn't sit inside at a restaurant during a corona surge.

Byrne, who loves him some Trumpy Gov. Ron DiSantis, said that in FL he felt free to wine and dine on "brisket and bacon burger slathered with BBQ sauce, cheese, onions, and mayonnaise."

I wonder where he'll move next.

Trump clone and radio shock jock Erich “Mancow” Muller says he wants to run for IL governor. No joke.
Pritzker must be trembling with fear.
Mancow is the anti-union, flat-tax, corona super-spreader pal of Roger Stone. (Stone claimed yesterday that "North Korean ships were delivering ballots through a harbor in Maine.”)
And guess who Mancow wants as his running mate? None other than former Chicago schools chief and perennial campaign loser Paul Vallas.

I get it. The two of them are ideologically simpatico. But Mancow could do better. Doesn't he recall how Vallas' last campaign for Lt. Governor went down the toilet, pulling incumbent Gov. Pat Quinn down with him? Or how Vallas fared running against his nemesis, Chicago Mayor Lori Lightfoot, and finishing seventh in the races with 5% of the vote.

Meanwhile, Vallas has been keeping himself busy speaking at right-wing anti-masker, anti-shutdown QAnon rallies sounding every bit like Dennis Byrne in his attacks on Lightfoot and Pritzker?

It's HAPPENING!!! Time to #RescueIllinois☀️

Residents of all states welcome!!! 🥳 pic.twitter.com/YHXl7p8LoP