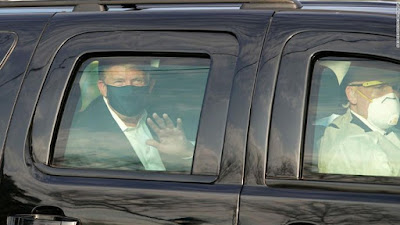 “This is insanity...Every single person in the vehicle during that completely unnecessary presidential ‘drive-by’ just now has to be quarantined for 14 days. They might get sick. They may die...For political theater,” the doctor added. -- Guardian

Conley on Sunday defended the decision to not disclose that the President was administered oxygen by saying he wanted to "reflect the upbeat attitude of the team."

"I was trying to reflect the upbeat attitude that the team, the President, his course of illness has had. I didn't want to give any information that might steer the course of illness in another direction, and in doing so it came off that we were trying to hide something," Conley said, adding that "wasn't necessarily true." -- CNN

America has a super-spreader president. He put us all – and himself – at risk. -- Guardian

Capitalists don’t divide the economic pie very well, he says, and so today the capitalist system, the foundation of the U.S. economy, is not working efficiently and effectively enough for all.

“Capitalism also produces large wealth gaps that produce opportunity gaps, which threaten the system...What’s going on is an economic downturn together with a large wealth gap and the rising power of China challenging the existing power of the United States. -- Market Watch

The Secret Service is supposed to be able to take a bullet FOR the President, not FROM him.