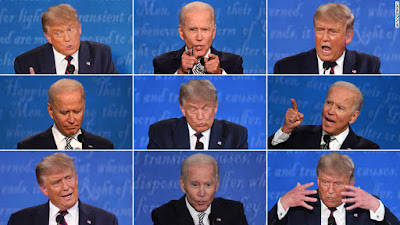 Trump at the debate: "I don’t wear masks like [Biden]. Every time you see him, he's got a mask. He could be speaking 200 feet away from me, and he shows up with the biggest mask I've ever seen."

Just when you thought there could be no real October surprises...

I mean what new sordid tale could possibly be left to tell about the Trump White House, that snakepit of grifters, fascists, and white supremacists, who are largely responsible for the deaths of more than 204,000 U.S. COVID victims? This, even after Tuesday's vile debate performance in Cleveland Tuesday night where the president mocked his opponent and bragged, "I don't wear masks like him".

Now we know. With only a month to go before election day comes word that DT and Melania have both contracted the deadly coronavirus. The carefully constructed media story now being dribbled out is that they got it from White House official Hope Hicks, the former fashion model who, at age 26 was conscripted to be his campaign press secretary, even though she had never worked in politics and had no campaign experience.

I'm sure that scenario will be rewritten and fine-tuned a hundred times once it's dug into. And in the days ahead we may learn the real story of how many others on the WH staff, the secret service, military leaders, or Republican pols have also been infected, directly or indirectly by super-spreader Trump? How many thousands more mask-disdaining MAGA rally-goers, Sturgis, S.D.-visiting bikers, or thousands of others who simply bought into Trump's fantastic tales about the COVID "hoax", or his hydroxychloroquine, sunlight, and bleach remedies, have died or are suffering from this interminable pandemic?

And let's not forget that Joe Biden, staffers, camera people, and technicians spent more than 90 minutes on a stage with the President. His family and his other guests were in the audience where Team Trump refused to wear masks.

Now it appears the chickens have come home to roost. October surprises? Buckle up. There's still a month left in the campaign and promises of more political chaos down the road.

This behavior is criminal. #TrumpHasCovid https://t.co/E0S5H8cjYA