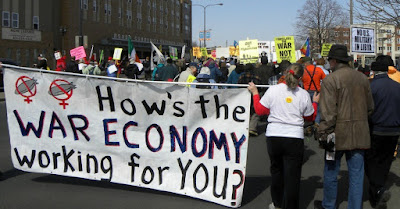 The very thought of a Trump victory in November is so odious that it leaves me fearful for the world's future and the future of my children and grandchildren. The growing threats of uncontained global pandemics, impending environmental disasters like the current west-coast firestorms, fascism enforced by a puppet Justice Department and a stacked right-wing Supreme Court for the next 40 years are all terrifying and will drive me and hopefully millions of others to the polls as soon as they open, to vote for Biden/Harris and to recapture the Senate.

But now and post-election, I am also deeply concerned about the right-center election coalition the Democratic leadership is banking on to win in November and to rule the country for the foreseeable future. It's an alliance built on a partnership with that old gang of neocons (so-called "moderate Republicans") and all but excludes the party's progressive wing.

Most troubling about the revival of the old Clinton/McCain foreign policy coalition is its regime-change and Cold War strategies. They are the foundations for eternal wars in Iraq, Afghanistan, and the Middle East--wars that are bringing us closer to what would be a disastrous military confrontation with China.

This grouping has never met a war they didn't like going all the way back to Vietnam, and Trump is actually seeking a faster withdrawal than Biden of U.S. troops from Afghanistan, Iraq, and those based in NATO countries like Germany. No less important, though perhaps less headline-grabbing, was Trump’s 2017 expansion of the 1033 program, which provides for the transfer of Defense Department military gear to civilian police departments. So increasing D.O.D. spending also means the increased militarization of the police.

Don't take it from me. Take it from Biden himself who yesterday assured the Pentagon brass that under his regime, its near-trillion-dollar war budget would not remain merely intact, but could be increased, and that U.S. troops would continue to be an occupying force in Afghanistan and elsewhere.

Biden said, however, that the Defense Department desperately needs to innovate in emerging technology such as beefing up its cyberwarfare capabilities and unmanned aircraft.

“We have to focus more on unmanned capacity, cyber and IT, in a very modern world that is changing rapidly,” Biden said. “I’ve met with a number of my advisors and some have suggested in certain areas the budget is going to have to be increased.”

Let's be clear:  Cyber and drone warfare are no less deadly than traditional warfare, while even increasing the numbers of civilian casualties.

According to the Pentagon's own organ, Stars & Stripes:

But the guiding star for the Pentagon since 2018 has been the National Defense Strategy, formulated by former Defense Secretary Jim Mattis, that identifies China as America's principal adversary. That's likely to carry over to the next administration no matter who's in charge, say defense strategy experts Mackenzie Eaglen of the American Enterprise Institute and Todd Harrison of the Center for Strategic and International Relations.

All this runs completely counter to the policies of the party's Progressive Caucus, which call for a 10% cut in military spending, with that $70B redirected towards social spending.

Ahead of the Senate’s consideration of a proposed $740.5 billion military budget authorization, Sen. Bernie Sanders took to the Senate floor to call for a 10% cut in annual Pentagon spending to invest in education, health care, and poverty reduction in America’s most marginalized communities. Sanders has been the most vocal critic of the Democratic leadership on this.

But Progressive Caucus' House amendment in July was soundly defeated with a majority of Democratic reps voting in opposition. A review of campaign contributions later showed that Democrats who voted against the amendment received far more campaign funding from defense industry interests.

Some pundits say that Biden's prostrating himself before the generals is little more than an election campaign ploy to take advantage of Trump's recent "suckers" and "losers" insults to GIs and veterans and win over Republican voters and isolating progressives in key battleground states. Another scenario has Biden is trying to placate the military brass to keep them neutral in the event that Trump refuses to leave the White House after losing the vote.

Such tactical moves in the face of a possible Republican win in November are understandable. But it's still pretty clear that Biden's election coalition partners are clearly pro-Pentagon spending and demanding that he rid himself of their progressive opposition as the price for their support.

That battle for the soul of the Democratic Party, as John Nichols calls it, will continue right up through election day and beyond.