Barr, take your law-and-order shit show out of our city 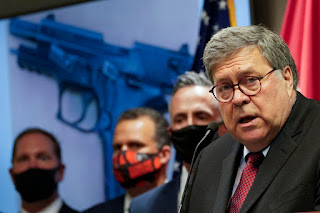 AG Barr, who has turned the Justice Dept into accused rapist Trump's personal defense attorney, get the hell out of our city!

Trump's protector and faithful sidekick, Atty. Gen. William Barr is in Chicago to tout his so-called Operation Legend, which has so far resulted in the mass incarceration of thousands of mainly Black and Latino young men in cities across the country.

Barr claims the operation is responsible for reducing the city's gun violence. But that claim is bullshit (not her words), according to Mayor Lori Lightfoot.

In contrast, Barr is using the Justice Department to aid and abet the international gang of criminals that now occupies the White House. The latest outrage is Barr's move to replace  Trump’s private legal team with DOJ lawyers to defend the accused rapist in a defamation suit brought by author E. Jean Carroll. Last year, Carroll credibly accused Trump of raping her in a Manhattan department store in the mid-1990s.

In Chicago, FBI sweeps have led to the arrests of more than 500 people, many on federal gun and drug charges so those arrested can be held without bail. The DOJ operation involves federal agents conducting large scale, counter-gang investigations using police informants and covert aerial surveillance. This at a time when Chicago's crime rate is on the decline and when area prisons have become COVID hot spots.

But Operation Legend has more to do with Trump's election campaign than it does with crime-fighting. Barr has used his appearance here to blame the supposed "wave of violent crime" on the ongoing nationwide protests since the police killing of George Floyd and Brianna Taylor, as well as on "anarchic and far-left extremist groups."

Using Wednesday's announcement in part to criticize ongoing efforts pushing for racial justice and police reform, Barr blamed those protests in part for a spike in crime nationwide earlier this year and repeated a "law and order" refrain often employed by President Donald Trump as he campaigns for reelection. -- 5 Chicago

With the election only weeks away, Trump is counting on a new law-and-order surge to energize his base and spread fear among white suburban voters while painting Democratic-run cities, especially those with black mayors, as crime-ridden "shitholes."

To her credit, Mayor Lori Lightfoot, while offering to work with the feds to control the worsening gun violence in the city, slammed the Trump/Barr political assault on Chicago, leaving Barr to complain that Lightfoot excluded federal efforts in their own discussions on the decrease in crime--adding that Chicago police had been invited to Wednesday's announcement but declined to attend, with Barr citing "politics" as the reason.

"They were certainly invited and could have attended," Barr said, when asked why members of CPD were not standing with federal law enforcement on Wednesday.


"Nearly two months ago, the mayor sent a letter to the President outlining areas where the federal government has the unique ability to help us fight the epidemic of gun violence... While the president continues to make factually inaccurate comments about Chicago from the political stump, almost two months later, we've received no response to the letter and worse, no results from him for Chicago. We hope Attorney General Barr's visit is part of an effort to help make these actions a reality as opposed to using our city and its residents as a political prop, as his boss regularly does."

Along with the black city mayors, the law-and-order Republicans' main target has been Cook County States Attorney Kim Foxx. Foxx is currently locked in a close campaign battle with Republican great-white-hope former prosecutor Patrick O'Brien who has attacked Foxx for being "soft on crime," particularly in her handling of the Jussie Smollett case, as a centerpiece of his campaign.

But it was O'Brien who led a Barr-like charge in a rushed effort to convict four West Side teenagers on trumped-up rape and murder charges more than 30 years ago. It is clear now that torture was used in obtaining a confession that led to their false conviction.

All. four were cleared by DNA evidence after a decade in prison.