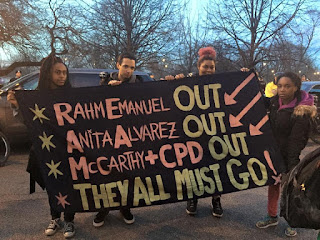 It was 2015, but seems like only yesterday when we were out in the streets demanding the firing of Mayor Rahm Emanuel, Chicago Police Supt. Garry McCarthy and State's Atty. Anita Alvarez over the cover-up of the racist police murder of Laquan McDonald. Despite Rahm Emanuel's rallying the troops behind McCarthy, we managed to run him out of town. Then we backed current State's Atty. Kim Foxx who made quick work of Alvarez in the election.

Now McCarthy's back and with Trump's political support and money coming from the likes of Rudy Giuliani, he's making noises about running for mayor against his former pal Rahm in 2019.

Problem is that when it comes down to it, he and most of these backwards, newborn pols can't seem to keep their racist mouths shut. Or maybe they're just not being prepped properly. Whether it's professional hate-tweeting Trump (Mexicans are "rapists and criminals"), or Billionaire IL guv candidate J.B. Pritzker, offering to cover then Gov. Rod Blagojevich's ass on the "African-American thing", they seem to all be wired for racist-blurt.

Pritzker put it best, after being caught on an FBI wiretap describing his preference for “a safe black … one that's not going to make any waves.” He apologized by saying, "I was not my best self".

Being his old best self  Monday, at a Northwest Side fundraiser, McCarthy had this to say about the growing mass black exodus from Chicago.


"You know which Blacks we are losing, we are losing the middle class taxpayers who can afford to get out from the South and the West Side. So who is being left behind? It's the trigger pullers."

Yes, "trigger-pullers is how the former top cop views all African-American families currently living on the south and west sides. Is it any wonder that during his administration we had a record quarter-million stop-and-searches within one 90-day period.

Yesterday on twitter, a fellow Rahm critic and Troy LaRaviere supporter, implored me, that even if McCarthy or Paul Vallas should make it to a run-off, we should vote for them against the hated Rahm. I tweeted back...


You mean, support Vallas or McCarthy? You're kidding, right? Have you met me?
— Mike Klonsky (@mikeklonsky) February 13, 2018