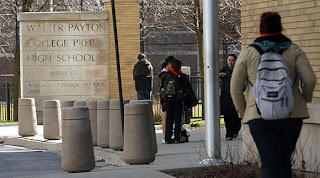 I know that Payton kids score high on standardized tests. The question is, what are they learning? What's the hidden curriculum?

Payton was in the news twice last week. Once for being the school of choice for the rich and powerful within CPS's two-tier system of supposedly public education. The other for its refusal to allow their baseball team to play a game at predominantly-black Gwendolyn Brooks College Prep in Roseland. Don't you love all this College Prep stuff?

Whether it's billionaire clout monger, Bruce Rauner buying his kid's entry through Payton's back door, from Arne Duncan, or parents' racist elitism (what else could it be? No north-side student has ever been harmed playing sports at Brooks) the school, which admits a third of its students from private elementary schools, has now become a poster child for this city's apartheid education system, a system that will only be reinforced through the mayor's closing of 54 schools, nearly all in the African-American community.

Kudos to Brooks coach, Herbert Redmond for calling the Payton snub for what it was -- "racism", and to coach Bryan Street for refusing to schedule any more games with Payton's baseball team. As a high school coach myself, I think all our school teams should follow suit and boycott Payton.

Shame on CPS liar-in-chief Becky Carroll and CPS officials who tried to cover-up the incident, telling the press it was a "scheduling and transportation problem."

Payton, which was built on the ruins of the formerly black community around Cabrini Green, should also be forced to change its name. Their actions dishonor the name of Chicago Bears football legend Walter Payton, who graduated high school in 1972 and had to play within Mississippi's segregated system of school athletics. Payton's own school, Jefferson High in Columbia, was "integrated" with neighboring Columbia High School, but Payton and his teammates boycotted spring practice when their head coach, Charles L. Boston, had to take an assistant's job to Columbia's white coach. Payton's battle against segregation left a lasting mark on him as I'm sure it will on many Brooks' snubbed student/athletes.

In fairness, it's not the students who are the problem here. Payton students have a great track record when it comes to speaking out against racism and elitism.
Posted by Mike Klonsky at 6:23 AM