I hear there was an election yesterday. Who knew? 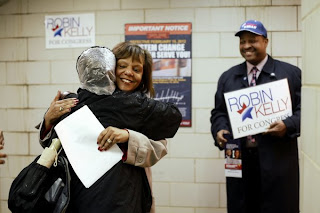 “We not only won an election,” Ms. Kelly, 56, said in her victory speech. “We took on the N.R.A., we gave a voice to the voiceless, and we put our communities on a brand new path to a brighter day.” -- New York Times

Congrats, I guess, to Robin Kelly on yesterday's 74% to 19% election win over Republican, whatshisname (a convicted felon who who served prison time for robbery and other charges). I don't know about giving voice to the voiceless, but I'm glad to see an African-American woman in Congress where she will become the least senior member of a House dominated by a gaggle of racist, male, Tea Party Republicans. She's only the second black female House member to come from Illinois. She replaces (convicted felon) Jesse Jackson, Jr. , the third congress person in the district to leave "under an ethical cloud" as they say.

A mainstream Democrat, Kelly campaigned heavily on  gun-control and was joined at her victory party by Nathaniel Pendleton and Cleopatra Cowley-Pendleton, the parents of Hadiya Pendleton, the 15-year-old King H.S. student killed by gun violence on Chicago's south side.

Kelly had won the primary with $2.2 million in SuperPAC money coming from New York's billionaire Mayor Michael Bloomberg. She obviously didn't need to spend too much on yesterday's race and it showed. Only 8% of city voters showed up at the polls. A friend joked yesterday that Kelly will use the war chest when she runs for senator from N.Y. She has as much chance getting real gun-control legislation passed is the House as... you add the rest. Hopefully, that won't stop her from speaking out loudly on the issue.

I have no idea on where Kelly stands on education issues. I don't think any else does either. Her district is being hit hard by school closings and privatization. But I'm assuming she will go along to get along with the rest of the Dems in support of Race To The Top and corporate-style school "reform". I can't say for sure since she has no voting record and never mentioned the issue during her campaign. And it doesn't really matter that much since there's as much chance of getting an education bill passed as... you add the rest.


******
The only other vote of note yesterday was in the suburb of Addison in heavily white, Republican DuPage County, where a referendum on shifting school pension costs to the township was defeated 83.6% to 16.4%.  Shifting pension costs to local districts rather than taxing the corporations,  has been a favorite theme of Republican and Democrat pension bombers down in Springfield. But it obviously isn't playing well in local districts.
Posted by Mike Klonsky at 5:45 AM