There's No Such Thing as a 'Low-Skilled Worker' 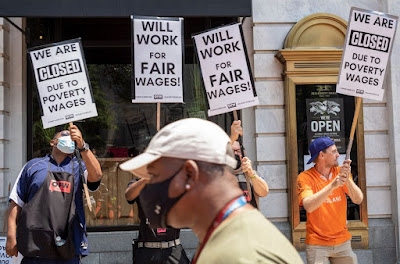 I hate the term, "low-skilled" to describe the millions of workers who have built and maintained this country and who are largely Black, Latino, female, and immigrant.

So-called low-skilled workers tend to be lower-paid, have fewer rights, and have less recourse to unions and other enforcement bodies. For example, foreign-born “low”-skilled workers are typically tied to an employer and cannot leave without invalidating their visa. They have also historically been used as a reserve army of unemployed workers to hold down wages and break strikes.

Wealthy countries like the U.S. depend on migration and immigration for essential labor and economic stability. Yet when deciding who is allowed to enter the country, most use a simple dichotomy based on educational attainment: “high” and “low” skilled.

Under the Trump administration and now with Biden and the Democrats in power, closing the southern border and abusing and deporting millions of immigrant workers and their families has led to devastating cuts in available low-paid laborers forcing restaurants and other businesses, eg. in agriculture and food production, that rely on immigrant labor to close once again.

The rhetoric around skills is typically based on a dichotomy between “high” and “low”: “high” being associated with university degrees and “low” with manual labor. But, these characteristics do not come close to describing a person’s comprehensive skill set; they are just the easiest to evaluate based on the standards and prevailing norms of capitalist society.

The pandemic and the growth of the so-called "gig economy" have exacerbated the divisions between "high" and "low" skilled with the latter being pushed onto the front lines and in harm's way as they deliver the goods and services need to keep a faltering economy on its feet.

Last week, Biden oversaw the ending of extended unemployment benefits in an attempt to force workers back on the job. Meanwhile, mega-corporations like Amazon have been forced to raise basic wages above the prevailing minimum in order to maintain their competitive edge, entice workers to work under otherwise intolerable conditions, and undermine union drives.

In this opinion piece, Bloomberg's John Authers warns that this wage growth is potentially bad for inflation.

"Wage growth for the lowest skilled is the fastest since August 2008 (not coincidentally, the month before the Lehman bankruptcy), and that could easily lead to higher prices."

"More interestingly still," writes Authers, "it does suggest a shift in the balance of power between labor and capital. This isn’t as yet a deep-seated or well-established trend, of course. But if it continues it could rattle a lot of assumptions, and alleviate a lot of social tension."

Authers fails to mention that while millions of people struggled to make ends meet during the pandemic, many of the companies hit hardest in 2020 showered their executives with riches. Chief executives of big companies now make, on average, 320 times as much as their typical worker, according to the Economic Policy Institute.

No, this widening wealth gap won't "alleviate social tension". Rather, it should provide new rich opportunities for struggling labor unions to expand their shrinking base by organizing the unorganized so-called "low-skilled".

*Also, see Teri Gerstein's piece in the New York Times: "Other People’s Rotten Jobs Are Bad for Them. And for You."