Is anybody buying this oft-told tale? 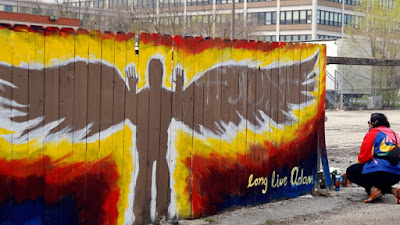 Following the police killing of 13-year-old Adam Toledo in Little Village on March 29th, CPD began spreading a story to local media alleging that a Chicago street gang was planning to avenge Toledo's death by murdering cops. Will this rumor be enough to legitimize Officer Eric Stillman's shooting of Toledo who had his hands up with no gun present at the moment he was gunned down. In case the cops weren't already operating with a hair-trigger response mentality, CPD leaders immediately began issuing a “officer safety alerts” to street cops claiming that the department’s narcotics unit had learned that factions of the Latin Kings in the Ogden patrol district on the Southwest Side “were instructed by ranking members to shoot at unmarked Chicago police vehicles.”

They offered no evidence to back up this tale. Neither have any LK leaders been identified as part of the alleged conspiracy or charged. This was on April 3rd. Today is the 17th and still not one reported revenge shooting which leads me to believe the planted story was a load of FOP crap.

It's too soon to tell if the story is credible, you say. Give it time to see if any of these attacks actually occur.

Well actually, I have given it some time because this same story has been popping up after police shootings for years.

First, check out this NY Post story from Sept. 2020 where the FBI warns of a supposed plot by Chicago gangs to ambush cops.

Dozens of Chicago street gangs have made a pact to “shoot on-sight any cop that has a weapon drawn on any subject in public,” according to an FBI warning.

The FBI’s “Potential Activity Alert” warns that almost three dozen gangs have reached the agreement, including the Vice Lords, Black P Stones and Latin Kings, according to ABC7 Chicago, which obtained a copy.

The Chicago Sun-Times, citing an alert issued to Chicago officers, reported Monday that the meeting took place on Thursday between the gangs Vice Lords, Black Disciples and Four Corner Hustlers.

According to the paper, the Four Corner Hustlers have “provided guns” and pinpointed a “sniper in place.” However, authorities are still unsure where the alleged sniper spot is placed. The gang is also funneling weapons to the other two gangs

What is true is that dozens of cops have been shot in the line of duty. But so far there have been no verified links between any of those shootings and these alleged conspiracies. It's time to stop spreading these potentially deadly rumors.