The shame of a nation. 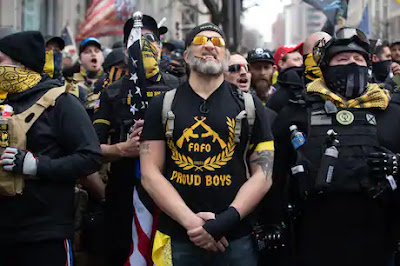 My blood is boiling after seeing news and videos of violent American fascists ("Proud Boys) being turned loose on mask wearers and counter-protesters in D.C. yesterday.

This follows by days 126 Republican congressmen and 17 red-state attorneys general signing on to the Texas lawsuit aimed at disenfranchising millions of voters, especially voters of color. As expected, the Supreme Court on Friday rejected the suit -- with only wingnut justices Alito and Thomas mumbling their dissent -- but not before more than 60% of House Republicans had signed onto the effort. This group of election deniers reached beyond Trump’s staunchest allies and included powerful figures such as the chamber’s top two officials and the leaders of influential committees, all of whom put their official stamp on this fascist measure.

This from the New York Times:

“Since election night, a lot of people have been confusing voters by spinning Kenyan birther-type, ‘Chavez rigged the election from the grave’ conspiracy theories,” said Senator Ben Sasse, Republican of Nebraska. “But every American who cares about the rule of law should take comfort that the Supreme Court — including all three of President Trump’s picks — closed the book on the nonsense.”

With all due respect to Sen. Sasse, I take little comfort in the decision. The Supremes did what they needed to do to regain any semblance of their lost credibility. Nor should we believe that it "closed the book on the nonsense." Its authors are only in the middle of Chapter I.

The point here is that Trumpism (neo-fascism) has now become a permanent fixture, a violent cult that has forced itself upon American mainstream politics. It's represented by a Republican Party with an elected president as its figurehead and with gangs of armed thugs and white supremacist militias ready and willing to be used when called upon to beat, murder, and intimidate opponents.

What does give me comfort is the size and scope of the anti-Trump resistance movement, more than 80 million of whom made their voices heard through the ballot box last month and in the streets this past year.

Next up on the battlefront... the election in Georgia whose outcome will determine control of the Senate in years to come. A Republican victory will mean that the Trump cult will be able to sabotage COVID recovery and continue to block all economic stimulus efforts.

Tonight in DC. ...Tell me how this is not like Berlin in 1935. Really. Somebody tell me. pic.twitter.com/KMM2lnzc8F

Check-out these Trump supporters surrounding a car at Thomas Circle.

They accused the driver and front seat passenger of being liberals — because they were wearing face masks inside of the vehicle.

Still no National Guard to be seen...pic.twitter.com/24sKcrO7In

Email ThisBlogThis!Share to TwitterShare to FacebookShare to Pinterest
Labels: fascism