How should we respond to the latest numbers? 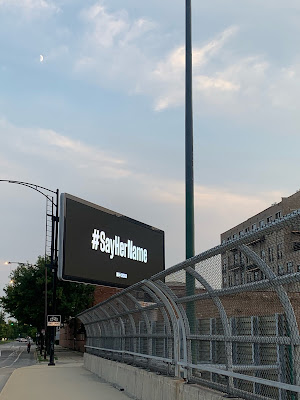 Chicago Mayor Lightfoot put this message on every digital billboard in the city.

Reporter: "Win, lose or draw in this election, will you commit here today for a peaceful transferal of power after the election?"

President Trump: "We're going to have to see what happens." -- NBC News

In case you're hanging your emotional hat on the ups and downs of the national polls -- don't. They really don't tell you much except that JoeBiden will likely be on top of the polls by election time, but by numbers within the margin-of-error. The state-by-state polls, especially in the 2016 battleground states, are slightly more telling. They clearly show that Trump is in trouble in many of the states he won in 2016.

For example, Biden is leading or running close in Iowa, Texas, and (can you believe it?) Georgia.

They show that Biden is running stronger in swing states than Clinton did in 2016, and if all the votes are counted fairly, Trump will lose, not only the popular vote again, but in the electoral college as well. Not only that, but a Biden victory will likely carry several more Democrat senate candidates to victory with him. Of course, that's all a big IF.

Trump may not be the brightest bulb but he can count just like we can. His likely response to these numbers will be a turn towards an extra-electoral move to hang onto power; i.e., a coup d'etat of some sort.

The coup is already happening with his appointment of a supreme court justice prior to the election, a key to his plan. Republican hope is that even if the election results are tied up in the courts, a majority of the justices will call it for Trump. Even if the plan fails, the high court will be key in intervening in state prosecutions of Trump and his grifter family.

The Atlantic reports that the Trump campaign is already "discussing contingency plans to bypass election results."

And this yesterday on CNN:

"Well, we're going to have to see what happens. You know that I've been complaining very strongly about the ballots and the ballots are a disaster," Trump said, when asked if he could commit to the peaceful transition.
"(G)et rid of the ballots and you'll have a very ... there won't be a transfer, frankly. There'll be a continuation."

To prevent Trump from stealing the election, says Elie Mystal in The Nation, people need to vote in such overwhelming numbers that we overcome all his shenanigans. And the best way to do that is to vote early in person.

Not everybody can vote in person, of course. I’m not a Republican, which means I don’t believe Grandma needs to risk death in order to win an election. The most you can reasonably ask of a person for whom going  to the polls is too dangerous is to request and return an absentee ballot. But if your state offers early in-person voting and it’s safe for you to do so, you should.

I agree with this voting strategy but would add that we also need to start making contingency plans around the possibility that the coup is successful and that it is backed up by police, military and para-military forces. Yes, vote early and in-person if possible, but get organized for a struggle that goes beyond election day.

The EC, born of compromise at the 1787 Constitutional Convention, was set up to protect the slave states. The result was that for 32 of the United States’ first 36 years, a slave-holding Virginian occupied the White House (John Adams from Massachusetts was the exception).

CHICAGO NUMBERS...Cook County State’s Attorney Kim Foxx is beating great-white-hope Republican Pat O’Brien by more than 14 points. This despite O'Brien trying to paint Foxx as "soft on crime" and Foxx being made a target by Trump and his partners at the head of the FOP over the Smollett case.