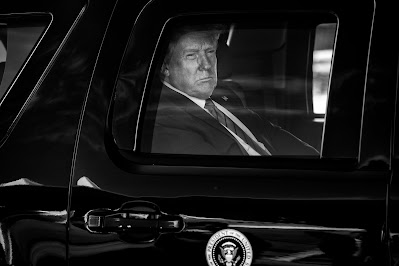 If Joe Biden can't win tomorrow's debate now, he's really in deep doo-doo. I mean, his winning talking points have been handed to him on a silver platter.

Joe -- just keep saying "seven hundred and fifty dollars" over and over. Viewers will get it.

The bombshell revelations that President Donald Trump paid just $750 in federal income taxes the year he ran for office and paid no income taxes at all in many others threaten to undercut a pillar of his appeal among blue-collar voters and provide a new opening for his Democratic rival, Joe Biden, on the eve of the first presidential debate. -- AP

Whenever they refer to blue-collar voters, their white blindspot is showing. You know they've only been interviewing white voters without college degrees for these stories. They're certainly not talking in class terms since Black voters, who are predominantly working class, never bought into Trumpism in the first place. While an overwhelming percentage of Black, Latinx, and working poor will vote for Biden and the Democrats; turnout and overcoming Republican vote-counting shenanigans will be key.

Winning Tuesday's debate doesn't necessarily mean winning the election. Biden remains steadily on top in the polls, but so did Hillary Clinton in 2016, winning the popular vote by 3 million votes even while running the worst campaign ever. But in swing states like Wisconsin, Michigan and Pennsylvania, Democrats failed to reach out and mobilize Black voters in cities like Milwaukee, Detroit and Philly and ended up losing those states and the electoral college votes that come with them, by less than 100,000 votes.

Biden became the party's nominee in hopes that his folksy style would win over white working class Trump voters in those battleground states. But so far, the campaign's focus on winning Republican voters has not paid off. For example, the Democratic convention featured more Republican than Latinx speakers, and now most polls show Biden with weak support among sections of Latinx voters.

This according to Peter Hogness and Emily Lee in their Guardian op-ed.

Defeating Trump is too important to leave to the Biden campaign.

Biden is not our savior. In fact, if he wins, on many issues he may be our opponent. But defeating Trump will open possibilities for organizing that won’t exist if he remains in office.

I doubt that most Democratic voters are looking for Biden to be their "savior." This election is about one thing -- getting Trump out of the White House and his fellow Trumpists out of the senate.

I don't know if Trump's personal gaming of the tax system will move the needle any in terms of losing his MAGA base. But the new revelations may hopefully put some pep into Democratc steps and give Biden some good talking points among working class voters who have to pay their taxes.

Working people have to pay taxes, why doesn’t Trump?

Everyday people must obey the law, why doesn’t Trump?

Trump’s entire life has been spent cheating the American people. His presidency is no different. #750dollars