After the broken glass has been swept 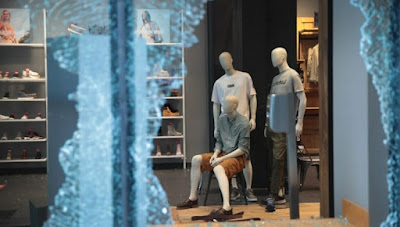 Looting... An inevitable, spontaneous reaction to the widening wealth and racial inequality gap which has been expanding at a record pace globally during the COVID pandemic.

Sunday night, there was another police shooting of a young black man in Englewood. The details of the shooting weren't immediately clear and still aren't. Why not? The cops weren't wearing their body cameras in clear violation of the federally imposed reform consent decree. CPD claimed it was because of "budget constraints". What a load of crap? Rumors about the shooting spread. Things got hot and carloads of people headed to the Miracle Mile to voice their anger.

Yes, the community is frustrated, they’re demanding reform and, sadly, some people are looting.

But loot-pillage-and-burn is more the strategy of  Donald Trump and his grifter family than that of the urban poor and working class. Just take as an example, his move yesterday to loot the U.S. postal service of $25 billion rather than give COVID-free voters a chance to remove him from office.

Looting has never been the way of the Freedom Movement as the Rev. Jesse Jackson reminded us, and it's somewhat disheartening to hear a young, movement militant holding forth in front of the TV cameras, dangerously (to themselves) calling on people to "take anything they wanted to take" and rendering looting more profound by describing it as "reparations."

Catanzara obviously wants to misdirect fire away from the police violence which set off this unprecedented wave nationwide protests in the first place, and onto Mayor Lightfoot and State's Attorney Foxx for supposedly "letting suspects cycle through the system without consequences."

Currently, a gaggle of downtown business groups, Chicago's corporate media, with the Tribune editors and Crain's Greg Hinz leading the way have joined Cantazara in attacking the city's Black leadership and even threatening elected officials, who he claims have "lost control" of the city. He's ordering them to "do their job" and restore law and order, or else...


This has to stop. Now. Downtown is the economic hub of the Midwest, with 600,000 jobs, including mine. It’s home to a quarter of a million people. And we are tired of having our neighborhood trashed because our mayor and our state’s attorney can’t seem to control things.

Note the emphasis on "our neighborhood". The people on the south and west sides are tired of life on the bottom as well. But "control" is an illusion under the current conditions. Police or even Trump's federal troops only play their role after the fact and have been the purveyors of violence rather than protectors. Take Portland as an example.

It's also worth remembering that the Mayor and State's Attorney don't just work for your patrons, Mr. Hinz. They're elected officials who ran and won in opposition to your machine candidates.

Remember, Mayor Lightfoot defeated your law-and-order guy Bill Daley who threatened to put camera-equipped drones on every street corner in Chicago. It was Daley who you proclaimed was, "the best guy for business." Obviously, Chicago communities didn't agree.

Kim Foxx is doing just what she was elected to do. She prosecuting violent crime while reforming the racist mass incarceration policies which have been plaguing Chicago Black and Latino families and communities for decades. To think that looters are looting because of her lowered bail policy is preposterous.

I'm especially glad to see that Foxx and Lightfoot are working it out after their initial falling out following Monday's looting. We need that unity.


By afternoon, Lightfoot and Foxx were on the phone. During the conversation, they agreed to work together to come up with solutions for moving forward to avoid another night of destruction. It was “a very productive call,” Lightfoot said in a statement.

“They both have to navigate this really complex terrain — with intense scrutiny from every direction — and find a way to get the unrest and violence under control while still executing on the reform agendas they ran on,” Joanna Klonsky, a comms consultant with close ties to both women, told Playbook.

Remember, the Miracle Mile was built by the city's working people who now can't afford to shop in those stores. People will find a way.
Posted by Mike Klonsky at 6:20 AM