Trump, the king of deflection, leads attentive media on a wild goose chase

Today's blaring Trump headline becomes tomorrow's page-15 news story. Every day brings a new provocation, a new outrage or baseless rant against the press corps. Is D.T. having a meltdown? A psychological break? Or is this all White House strategy to keep an always-attentive press and Democratic opposition (such as it is) off balance?

Trump's game plan of leading the press by the nose from one daily crisis to another and having Dems react, appears to be working to an extent. Democrats apparently have no campaign or media strategy of their own besides having Joe Biden send out messages from his basement.

I'm looking back on how the Dems dropped the whole Ukraine/impeachment thing five minutes after the vote was taken in the Senate. I don't really blame them for slinking away from that one. After putting all their cards in that basket, I doubt you will ever hear the word Ukraine even whispered by a Democrat again.

It's like the way you will never hear the words, "Race to the Top" from the lips of the old Obama/Duncan education crew.

Trump is the master of deflection. In just the past two weeks he's led us on a trail of fears, from hydroxychloroquine and bleach injections, to "very good people" with guns and swastikas at the Michigan statehouse, to yesterday's rant against Dr. Bright the whistle blower.

What will it be today? It likely depends on tonight's Trump's  overnight tweets. My guess is, the disbanding of the coronavirus Task Force. Bye bye, Dr. Fauci and Dr. Birx. Or maybe just a shot fired over the bow and a walk-back next week.

The press and the Democrats are still being led around by the nose. Only a few reporters dare to point out, the emperor has no clothes (ugh, make that go away).

One bright light is an ad created by a group of mainly neocon Republicans & never-Trumpers attacking DT's “failed presidency." Good on them.


“Under the leadership of Donald Trump, our country is weaker, and sicker, and poorer,” it continues, with somber string music reverberating in the background. “And now Americans are asking, if we have another four years like this, will there even be an America?”

Why can't Biden and the Democrats produce something like that instead of, "Trump is soft on China" or "I will veto Medicare for all even if it passes both houses"?


📺 NEW VIDEO @realdonaldtrump’s failed presidency has left the nation weaker, sicker, and teetering on the verge of a new Great Depression.

There’s mourning in America. pic.twitter.com/QoEWJVNEXc
— The Lincoln Project (@ProjectLincoln) May 4, 2020 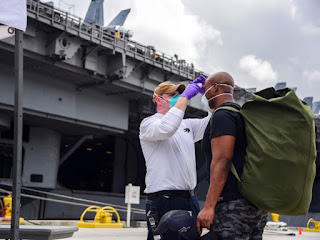 Speaking of media coverage...After a month of radio silence with most of its the crew in Guam, struggling to recover from COVID-19, the U.S.S. Roosevelt is headed back out to sea yesterday without its whistle-blowing Captain, Brett Crozier and with crew members knowing that the top brass doesn't have their backs.


More than 4,000 crew members went ashore last month. While more than 2,000 are back on board, at least 1,000 are still testing positive for the virus and remain on land. And the close to 700 crew members who had been protecting and running the Roosevelt and systems aboard have now moved into hotels and other facilities on the island for their quarantine. -- Time Magazine

But here's the latest...


Medical personnel and crew members on the Roosevelt say that several returning sailors have displayed symptoms that they associate with the coronavirus. But Navy officials counter that all sailors must have tested negative at least twice before going back on the ship, and that they will be tested again on board if they have even the mildest flu-like symptoms. -- N.Y. Times

I was amazed to see any coverage at all of the Roosevelt story since there's been an unofficial blackout on all reporting of the toll corona has taken on the entire fleet and on U.S. invasion and occupation forces in Iraq, Afghanistan, Syria and elsewhere.