Rich New Yorkers are fleeing the city and headed for second homes upstate to avoid the densely packed NYC, which has become the epicenter of the coronavirus crisis. But NYT reports that upstate locals don't want 'em.


People with second homes in the Catskills region of New York are being warned to stay away in venom-laced Facebook posts and blunt messages from county officials. Boardwalks and beaches in some Jersey Shore towns are barricaded and residents are urging the closure of coastal access bridges to outsiders. In the Hamptons, the famous playground for the rich on the East End of Long Island, locals are angry that an onslaught of visitors has emptied out grocery store shelves.

At least they're not blaming the Chinese.

In Illinois, right-wing pols like NRA puppet and state Rep. Brad Halbrook, calling themselves the New Illinois Movement, are using the issue of early-opening to play off white downstaters against Chicagoans, are pushing to force Chicago to "secede" from the state. They know full well that won't happen. Without Chicago, the state economy, especially their own,  wouldn't exist. But it's a desperate, demagogic (racist) move to salvage some votes and keep down-ticket Republicans from going down with the Trump ship in November.

Meanwhile, the U.S. is suffering worse joblessness than other countries. Almost three million more Americans filed for jobless benefits last week. The total over the past two months is now 36.5 million. 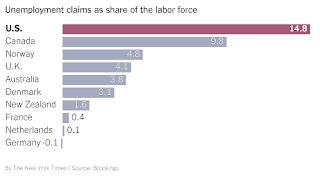 More from David Leonhardt at the Times:


What’s striking is that the countries with the smallest increases in unemployment have something in common. Their governments have put in place sweeping programs that directly pay companies to retain their workers. The details differ. Australia, Denmark and New Zealand created new programs. France and Germany expanded existing programs. But all of them have tried to maintain the connection between employer and employee even as much of the economy is temporarily shut down.

An even better plan would be for universal health care and a guaranteed basic income so that workers wouldn't have to make the impossible choice about work vs. health in the time of Corona.