If Biden's toast, who's the new chosen one? 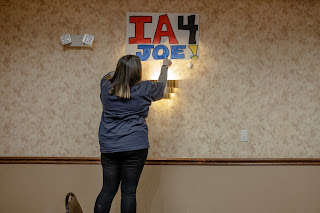 “I’m not going to sugarcoat it. We took a gut punch in Iowa." -- Joe Biden

It's now Wednesday evening and I still don't have the final Iowa vote count. With 86% of the vote in, Buttigieg leads Sanders by a point. I'm told, they're still trying to find my friend Burt's vote. You know Burt. He's the guy in the plaid shirt that caucused over at the Shell station in Dubuque.

But given all that, let me say I'm startled at how badly Team Biden did. Remember, JB was touted by DNC leaders as the most likely to beat Trump in a head-to-head. That claim was made with no polling evidence to back it up. But it was repeated over and over until it was accepted by many Democrats on faith, who felt, and still feel that Sanders will fall victim to Trump's red-baiting.

Now it's a desperate Biden that's using Trump's McCarthyite tactics to play on fears about Sanders. Today he told a crowd in New Hampshire:


"If Senator Sanders is the nominee for the party, every Democrat in America...will have to carry the label senator Sanders has chosen for himself,” Biden said of Sanders’ self-proclaimed "Democratic Socialist" label.

On last week's show, I actually told Brother Fred I thought Biden would win Iowa in a close race with Sanders. I thought the intense infighting between warring factions would divide the progressive vote and demoralize voters so badly that Biden would slip in front.

I was wrong as I'm sure my brother will remind me this Friday.

Instead, after spending months and practically his whole war chest in Iowa on stupid Iowa caucuses that helped few and hurt many, Biden now sits holding his gut and grimacing, in fourth place. He trails behind Buttigieg, Sanders (11 delegates each), and Warren (5), with zero delegates, slightly ahead of Klobuchar (also with zero).

With five months to go before the convention in Milwaukee and less than a month 'til Super Tuesday, Biden's campaign is in deep doo-doo. The DNC's anybody-but-Bernie campaign is proving to be a bust.

According to the New York Times which endorsed Warren and Klobuchar:


...he now faces jittery donors, an uncertain landscape in upcoming Democratic contests and a sharp challenge to the central argument of his campaign message: that he is the party’s strongest candidate to win a general election.

I may be getting ahead of myself on this, but if he's no longer the DNC's chosen one, then who is?

I know some of those jittery donors and they don't want to piss away billions on a loser again. One party bundler told me she's now backing Buttigieg. But it's hard for me to believe that many will ride a candidate who has no visible black support.

Another Dem donor told me that party leaders are now in meetings with Bloomberg's team and that with a few concessions on his part, a Bloomberg/Harris duo could be DNC-knighted. That assumes he wants their official support.

Take note of how they've been slamming Bernie for the past four years for not being a bonafide Democrat. One wonders how they will rationalize supporting a Republicrat oligarch like Bloomberg, should it happen?

My take at this point is that Democrats may or may not be able to beat Trump with Bernie as their candidate. No one knows for sure. But I doubt they can win without him and his young, activist base.

In other words, they're meeting with the wrong team.