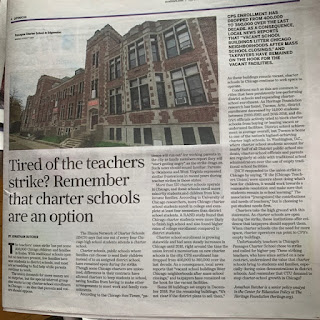 In the wake of horrific Hurricane Katrina in 2005, Univ. of Chicago economist Milton Friedman called the event "an opportunity to radically reform the educational system.”

For all my radical friends out there, by "radically reform," Friedman didn't mean fully democratizing public ed. Rather he meant nothing less than replacing all public schools with privately-run charters. With the help of fellow free-marketeers like Paul Vallas, who became the head of post-Katrina New Orleans schools, that's exactly what happened.

It was Vallas's successor at CPS, Arne Duncan who, as U.S. Secretary of Education, dotted Friedman's i's and crossed his t's by calling Katrina “the best thing that happened to the education system in New Orleans.”

It was then up to Chicago Mayor Rahm Emanuel to sum things up with his 2012 catchphrase, "Never let a serious crisis go to waste."

Naomi Klein would later expose this shock-and-awe strategy of "disaster capitalism" in her best-selling book, The Shock Doctrine.

I'm recalling the shock-doctrine mentality while reading a full-page pitch in this morning's Sun-Times by the far-right Heritage Foundation, proposing to replace Chicago's public schools with privately-run charters in order to avoid the inconvenience of teacher strikes. Ironically, S-T is partially owned by the Chicago Federation of Labor.

The city is currently in the ninth day of a teacher's strike, with little prospect of a settlement in sight, and today's prophets (profiteers) of unregulated free markets are once again trying to capitalize on a city's crisis.

The logic behind their sales pitch is that since Chicago charter teachers are forbidden by law from being in the same bargaining unit with CTU Local 1, the city's charter schools have remained generally union-free. Thus, if you have no unions, you will have no strikes. No strikes, no inconvenience for parents. Voila!


Charter schools, public schools where families can choose to send their children instead of to an assigned district school, have remained open during the strike. Though some Chicago charters are unionized, differences in their contracts have allowed charters to keep students in school, saving families from having to make other arrangements to meet work and family commitments.

How convenient! Except for one thing. Charter schools, funded by the state, are facing the same funding crisis as public schools. Illinois is 50th of the 50 states when it comes to equitable funding of school districts.

Charter teachers, who are generally working for less pay, with less autonomy and with far worse working conditions than the teachers in regular Chicago public schools, are slowly-but-surely getting organized and speaking out against their exploitation by charter operators. And unlike traditional CPS schools, where the union bargains with a publicly-elected mayor and her appointed school board, charter teachers and their unions must each face-off with their own privately-appointed and unaccountable boards of directors. Often these not-for-profit boards actually sub-contract the operation of the schools to for-profit operating companies.

Not only have the charters failed to produce better results than the public schools they are replacing, but charters are no more immune to strikes than are the schools in so-called right-to-work states like Arizona, Oklahoma and West Virginia, where strike waves have recently rocked the system.

The last paragraph in the Sun-Times piece (which reads like a last-minute add-on), makes my point:


Unfortunately, teachers in Chicago’s Passages Charter School chose to strike and called for higher pay. These striking teachers, who have since settled on a new contract, undermined the value that charter schools bring to students and families, especially during union demonstrations in district schools. And remember that CTU demand to stop charter-school growth in Chicago?

Yes, and a good demand it is.  The Chicago teachers’ union secured a cap on charter school expansion in their last contract negotiations in 2016. That should also be embedded in the new contract.

Thanks for reminding us.