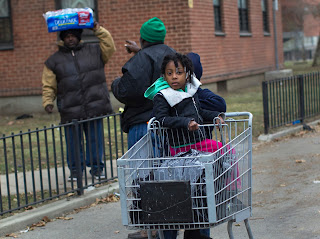 "Poverty is a life-threatening issue for millions of people in this country, and this report confirms it."—Sen. Bernie Sanders

There are now around 100 million, or nearly a third of the U.S. population living in poverty or near poverty. This figure is missing from glowing news reports about the booming Trump economy. While there are millions of white people living in poverty, poverty rates among African-Americans, Latinx, and Native Americans run two to three times higher.

A newly released report from the U.S. General Accounting Office on Retirement Security, commissioned by Sen. Bernie Sanders reveals that the rich are living longer lives, while poor and middle-income Americans are dying at a comparatively earlier age. Talk about privilege!

This from the report:

There's some -- but not much -- mention of racial inequality in the report.

"We must put an end to the obscene income and wealth inequality in our country, and ensure living wages, quality healthcare, and retirement security for our seniors as human rights," said Sanders. "If we do not urgently act to solve the economic distress of millions of Americans, a whole generation will be condemned to an early death."

Bernie never mentions race in his introduction to the report. It seems to be his perennial blindspot. But he deserves credit for being the only candidate speaking out forcefully on income and wealth inequality.
Posted by Mike Klonsky at 4:15 PM