Cunningham's response to the devastation of black communities? Bring in 'new people'. 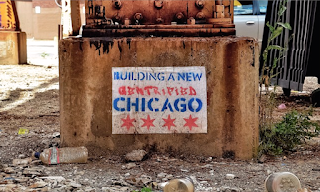 Just when you think we've heard the last from the disastrous duo of Arne Duncan and Peter Cunningham, they become media go-to guys on (of all things) gun violence and community development.

Remember, this was the pair that ran the Chicago Public Schools and the U.S. Dept. of Education for years, promoting austerity, mass school closings, privatization and uncapped expansion of privately-run charter schools in black communities. Their policies helped lead to the devastation of urban school districts and contributed to school re-segregation and the push-out of thousands of black and poor families from cities like Chicago.

Why media would turn to them for meaningful solutions to the problems they helped create is beyond me. But here we are.

Cunningham's Sun-Times commentary yesterday (To revive declining South and West Side neighborhoods, import people) was the most egregious. The headline says it all. Now that 300,000 African-Americans have been pushed out of Chicago over the past few decades, Cunningham sees their replacement with thousands of "new, middle-class people" as the city's salvation.

How unoriginal. I have referred to it as the whitenization of the cities. But it's deeper than that.

Cunningham asks, just how do you attract the gentrifiers into formerly segregated, disinvested and isolated neighborhoods like Englewood? He turns to Godfather mobster character Vito Corleone for an answer. "Make them an offer they can't refuse."


So, what would it take to get 4,000 young middle-class families to move into these neighborhoods? The answer, or at least part of it, is affordable, high-quality housing. Sell the houses at cost.

If that’s too high, help cover the down-payment. Still no takers? Help pay their college debt or give them a 10-year property tax exemption, something Philadelphia has done.

Welp, where has that been? Why wasn't that offer made to the families who lived there before, the ones who built those neighborhoods and went to the now-closed neighborhood schools? The ones whose homes were foreclosed upon during the subprime crisis?

As for Duncan, who now runs Chicago CRED—a counseling and job placement service (not exactly what he was primed for by the Emerson Collective), he's cited as an expert on neighborhood gun violence in a Crain's column by Joe Warren.

There, he carefully avoids any mention of gun control. Instead, Duncan appeals directly to his corporate pals, asking them to hire some gun offenders.

Yes, hire more and arrest less. But this doesn't even begin to deal with the enormous scope of the problem, as Mayor Lightfoot has pointed out in her recent jousting with Ted Cruz.

But how do we stop the flow of guns and drugs into the city? What do we do about mass youth unemployment, disinvestment, and under-resourcing of public schools? The notion that the answer to Chicago's gun violence epidemic rests simply with more counseling and job placement is absurd on its face.

To quote the mayor:


“There’s a great need across this country for federal leadership in particular to step up and come forward with a real plan to deal with the gun violence that we’re seeing not only in cities like Chicago but really across the country.”