DT is obviously suffering from both delusions of grandeur (the "King" of Israel and the "chosen") and persecution by the media.


"Trump believes all the anti-semitic stereotypes about Jews. But he sees those traits as admirable”.

Most telling were DT's shoutouts to his hero, Hitler symp and notorious anti-semite, Henry Ford.

Henry Ford would be very disappointed if he saw his modern-day descendants wanting to build a much more expensive car, that is far less safe and doesn’t work as well, because execs don’t want to fight California regulators. Car companies should know....
— Donald J. Trump (@realDonaldTrump) August 21, 2019

The Legendary Henry Ford and Alfred P. Sloan, the Founders of Ford Motor Company and General Motors, are “rolling over” at the weakness of current car company executives willing to spend more money on a car that is not as safe or good, and cost $3,000 more to consumers. Crazy!
— Donald J. Trump (@realDonaldTrump) August 21, 2019


If Ford were alive today, he would be a big fan of Trump and his Proud Boys thugs who were out in force in Portland last weekend. Ford had his own Silver Legion of America (Silver Shirts) which he mobilized to spread fear and intimidation. He used his newspaper, The Dearborn Independent to promote anti-semitism. 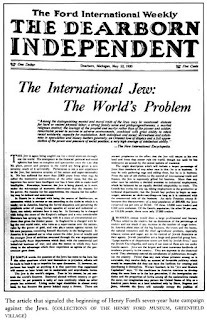 Ford’s anti-Semitic manifesto, The International Jew, had a profound influence on Adolf Hitler. In his own book Mein Kampf, the Führer noted Ford’s achievements as an American industrialist. Hitler not only kept a picture of Ford in his office; in July 1938 the German Counsel presented Ford with the Grand Cross of the German Eagle, the highest an honor bestowed by the Reich onto foreigners.

DT's claim that Jews who vote Democratic are "stupid or disloyal" comes straight from Ford's playbook.

No wonder he is so devoted to Henry.