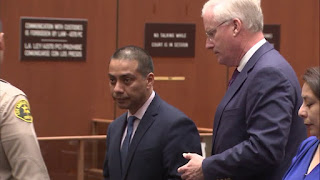 Ref Rodriguez has finally resigned from the L.A. school board, but only after pleading guilty to a felony count of conspiracy and several misdemeanor charges involving election fraud. In doing so, he admitted that he was part of a scheme to conceal that he was the true source of early donations to his campaign.

He had already stepped down from his position as board president, but had refused to give up his seat on the board for the past year.

Rodriguez was seen by many school and community school activists as a puppet of billionaire school power player Eli Broad, whose goal has been nothing less than turning LAUSD into a total charter school district, like post-Katrina New Orleans. Broad along with a PAC of billionaire charter patrons spent millions and virtually bought the school board election. They bankrolled Rodriguez' election campaign as well as the rest of the pro-charter majority that took over the board 3 years ago after the nation’s most expensive school board elections ever.

Even after Rodriguez had been indicted on three felony counts and 25 misdemeanors, charter advocates like Peter Cunningham still tried to cover for him, calling his long list of crimes, "a rookie mistake".  In a sense, they succeeded.

Under the deal with prosecutors, Rodriguez will get a slap on the wrist and avoid jail time. This work, he said, will continue: “I will just pursue that work from a different position.”

Unfortunately, with Broad's money propping him up, he's probably right.

The wheels of justice turn slowly.
Posted by Mike Klonsky at 1:16 PM