Educators have no business supporting war

War is the enemy of education, of children and families. Education leaders have no business supporting war or encouraging war-mongering politicians or militarists to invade or bomb other countries. But this is exactly what happened Thursday when Trump bombed Damascus and other Syrian cities in response to the Syrian government's alleged use of chemical weapons in it's war against rebel groups.

Without getting congressional approval, and with Gen. Mattis, and Sarah Huckabee-Sanders admitting there was "no conclusive evidence" the Assad regime had used those weapons (a day before inspectors from the OPCW were attempting to enter Syria) the U.S. launched, what turned out to be a largely symbolic missile attack on selected targets. Those targets may or may not have had anything to do with chemical weapons production.

Symbolic as the raid turned out to be, gaining no U.S. military or political advantage and obviously more for domestic political consumption, one can only imagine the terror felt by Syrian children and families as missiles rained down upon their already war-torn cities. So far, U.S. missiles have already reportedly killed more than 6,000 Syrian civilians. If anything, the attack seemed to rally more Syrians in support of Assad.


Hours earlier, civilians and soldiers gathered in Ummayad Square in Damascus for a show of support, waving Syrian flags and dancing to songs that praised the army.

More than that, the missile attack threatened to turn the cold war with Russia into hot war and lead to Israeli-inspired military action against Iran. Luckily, cooler heads prevailed. Reportedly, Pentagon generals were on the hotline with their Russian counterparts before the raid.


[Chairman of the Joint Chiefs of Staff] Dunford said the only communications that took place between the United States and Russia before the operation were “the normal deconfliction of the airspace, the procedures that are in place for all of our operations in Syria.”

You got to love this new word added to the war lexicon, "deconfliction". 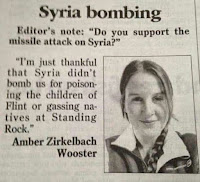 Trump has personal interests in avoiding confrontation with Russia. More accurately, he's in bed with Putin and the Russian oligarchs. See how he pulled the rug out from under Nikki Haley after she announced Russian sanctions at the U.N. Meanwhile top Democrats and neocons continue to push for regime change in Syria and expansion of the Syrian conflict to include Russia and Iran.

The thing that angered me most was seeing support for Trump's bombing raid coming from top Democrats and AFT leaders like Randi Weingarten and Leo Casey. Their criticism of Trump was that his attack on Syria "didn't go far enough".

Weingarten called the illegal bombing raid, "a retaliatory strike" as if the U.S. was attacked by Syria.

Then she signaled approval for the attack with this tweet:

None of this is really news. Here's AFT's official statement from a year ago when Trump bombed Syria.

“Syria’s barbaric use of chemical genocide required an immediate response, which President Trump’s missile strikes accomplished last night. While we believe Trump should have gone to Congress first, I find it curious that many members of Congress who are applauding the U.S. strikes had opposed former President Obama when he sought congressional approval for similar action.

Casey went even further, referring to those opposed to the missile attack as "isolationists" and "America Firsters", even accusing anti-war activists of being silent on the settlement of Syrian war refugees. A ridiculous charge.

My unpopular opinion: I see a lot of people who were silent on US' refusal to accept refugees from Syria waxing righteous about the bombing of chemical weapon facilities. It's an America First, isolationist wolf in sheep's clothing.
— Leo Casey (@LeoECasey) April 14, 2018

When confronted with the illegality of the attack and it's violation of international law, Casey echoed Trump, tweeting:

If you actually believed in international law, you are a dollar short and a day late.
— Leo Casey (@LeoECasey) April 15, 2018

As expected, support for the bombing also came from top Dem leaders like Nancy Pelosi.


“Tonight’s strike in Syria appears to be a proportional response to the the regime’s use of chemical weapons. -- Fox News