Year-end report shows CPS now top district (ever) in the U.S. and the world. 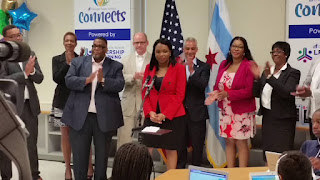 End-of-year tabulations are in from Chicago Public Schools. CPS reports that in 2017, 120% of entering freshmen graduated on time with every CPS grad being accepted at either Harvard or Yale on full scholarship.

To add icing on the cake, Stanford's Institute for the Study of Instant Success (ISIS) reports that Chicago's standardized test scores are now, 'the highest in the nation', even topping wealthy, white suburban high schools and totally eliminating the historic achievement gap between white students and students of color. All this, despite CPS remaining a racially segregated district with 90% of its students living in poverty, proving that “demography isn’t destiny “.

ISIS researchers attributed the miraculous gains to "early intervention". According to one ISIS team member, CPS leaders were able to identify entering kindergarten students who were coming to school "un-ready to learn" and encourage their families to relocate in the inner-ring southern suburbs or in Gary, Indiana.

Interventions also included the hiring of consultants who were well known to previous CEOs Forrest Claypool and Barbara Byrd-Bennett.

Each deserves their share of credit for the district's turnaround, according to Mayor Rahm Emanuel, and for what's being called the new "Chicago Miracle" (as distinguished from Arne Duncan's Renaissance 2010 miracle and all miracles under previous administrations).
Posted by Mike Klonsky at 6:17 PM