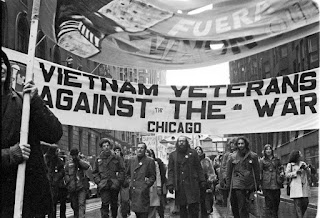 I've only seen bits and pieces of Ken Burns and Lynn Novick's 10-part, 18-hour-long documentary series on the war in Vietnam. I watched as much as I could last night, but had to leave the room when the part about the 1968 My Lai massacre came on. Although massacres of Vietnamese civilians like the one in My Lai were not uncommon, we in the anti-war movement didn't learn about it til a year later because of the press blackout. Still, it and the other earth-shaking events from '68 -- the King assassination, cities in flames, the Chicago Democratic Convention protests, and more -- are seared in my memory, along with so many of the images we are revisiting in the Burns/Novick film.

It was these very images, along with TV news reports of dogs and fire hoses used on civil rights marchers coming out of Mississippi and Alabama, that led so many of us to begin making connections and seeing the war as much more than just a mistaken policy of misguided liberals. In 1965, SDS organized the first mass anti-war demonstration in D.C. By 1968, with the war dragging on, the draft, the body counts mounting, the almost-daily images of napalmed villages coming across our screens, we moved beyond just anti-war, to opposition to global imperialism and systemic white supremacy.

I'm not ready yet to offer a full-blown critique of "Vietnam" without seeing more. Many of my friends from back in the day are already going at it, reviving the fierce debate that went on at the time over the nature of the war and how to end it. I think that's fine and I already credit the film with with jarring the national memory -- or maybe I should call it, national amnesia -- about the war, regardless of Burns' perspective. For us educators, it's a teachable moment. For organizers and activists, its a signal to get moving again.

I only wish the same heat, passion, analysis and organization, was taking shape over our current "eternal wars" in Afghanistan, Syria, Yemen and elsewhere in the absence of the kind of movement we built back 50 years ago. This, even as Trump, his generals and war profiteers bring us once again to the brink of nuclear war on the Korean peninsula. There are many reasons for this absence. But I'll save that for another post.

On Friday's Hitting Left show, our in-studio guest will be Vietnam war vet, Barry Romo, a long-time organizer of Vietnam Veterans Against the War (VVAW). Barry helped organize the protest in D.C. where decorated war vets introduced themselves one-by-one, each stating his name and rank, and then threw their medals over the fence, toward the Capital.

His story of how the war transformed him is a compelling one. Tune in Friday at 11-noon CDT, streaming live at Lumpenradio.com.
Posted by Mike Klonsky at 4:39 AM