Trump's war on the cities 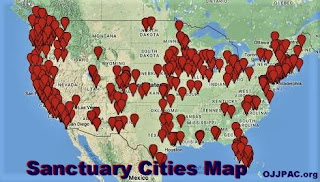 Why does Trump hate the cities? It's because that's his enemy's stronghold. Just listen to him, still pissing and moaning about his 3-million vote loss of the popular vote. He's a man obsessed.

He blames "millions of illegals" who supposedly voted illegally for Hillary. But deep down, he knows the truth. There wasn't one major city with a large black or Latino population that went for Trump in November.

This is the first time since 1920 that the Census has recorded that more people living in urban than in non-urban areas. And urban has become synonymous with black and Latino.

As Ronald Brownstein observed in The Atlantic:


Of all the overlapping generational, racial, and educational divides that explained Trump’s stunning upset over Hillary Clinton last week, none proved more powerful than the distance between the Democrats’ continued dominance of the largest metropolitan areas, and the stampede toward the GOP almost everywhere else.

Trump and the Republicans know they can only govern the cities with an iron fist. Four days in and Trump is already threatening to invade Chicago with federal troops to supposedly end the "carnage" of violence there. But threats of outside military and other interventions only build on Mayor Emanuel's failed policing and mass-incarceration strategies.

But the real "carnage" in Chicago took place during Trump's own election campaign. His being run out of town by 25,000 protesters at UIC back in March still gnaws at him. His experience in New York City was similar.

Then on Saturday, the largest protests in this nation's history kicked his inauguration off the front pages. Not counting the national Women's March in D.C., 250,000 turned out in Chicago. 600,000 in New York. 750,000 in rainy L.A.

Trump and the Repubs want to take revenge on the cities by 1) strangling them into submission economically, leveraging federal dollars and cutting even further their corporate tax base, 2) limiting their voting power with stricter voting measures, 3) shrinking the size of the cities through mass deportations of immigrants, and 4) challenging their sovereignty with federal intervention.

Trump signed directives Wednesday to build his $15B wall on the southern border and to begin his round-up immigrants. He's threatening to withhold federal funds from sanctuary cities that act to protect their immigrant citizens from deportation round-ups, forced registration, and internment camps. While the threat probably won't be taken seriously in the biggest cities, especially in those where Trump has, or plans to have, his own personal investments (hotels and casinos), it will weigh heavy on smaller ones like New Haven, CT.

I must interject here... I think he learned this tactic from former Ed Secretary Arne Duncan who established a precedent when he used Race To The Top to threaten to withhold federal education dollars from states like WA that opposed privately-run charter schools or Common Core related standardized tests.

Several Democratic mayors and other pols, are still playing footsie with Trump, hoping against hope that his threat to invade and impose some form of martial law will somehow turn into a money invasion to pay for more cops and infrastructure repair, and relieve city debt,  rather than a militarization. So far, there's no evidence for this.


“The threat to militarize our communities will be met with the same spirit of fierce resistance as efforts to increase ‘stop-and-frisk,’ register and ban Muslims, and deport millions of immigrants.

“We remain committed to working with all levels of government to fight for resources for our communities--but not at the cost of our civil liberties or our very democracy .