The voters sent a clear message that income inequality weighed on their minds, with more than one in four Democratic voters saying the issue was the most important facing the nation, according to surveys of voters leaving the polls. -- New York Times

Impressive win for Bernie... He's finished dead-even in Iowa. Split the delegates. 6 coin flips was Clinton's margin of victory. Did somebody check the coin? 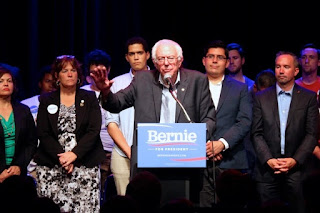 A SmallTalk Salute goes out to Bernie's campaign field workers and organizers, many who drove out from Chicago, who out-organized Clinton's team. I don't know this, but I'm guessing there were lots of teachers doing Bernie's door-knocking and caucus debating despite premature Clinton endorsements by AFT and NEA.

Yesterday marked significant losses for Wall Street-backed Clinton and Trump. Imagine if there were no Citizens United or SuperPACs. Sanders would have romped. Sanders' average donation was $28, an amount that will allow him to return to his contributors for more money during the spring. Only a few hundred of his 1 million individual donors gave the maximum of $2,700 for the primary.

Look for a major Clinton staff shake-up following this debacle.

Trump showed he's all blow and no go. It's one thing to hold a rallies or appeal on talk shows to the same tiny wing-nut hard core, cheering your every fascistic, militaristic, racist and misogynistic cliche. Big Republican money may now go to Rubio as the only hope to save the party. Not much hope there.

S-T columnist Mark Brown is miffed. He can't understand why CTU members aren't all giddy and jumping for joy over Rahm/Claypool first offer in over a year. Of course, Brown hasn't read the contract offer. Nor does he have to live with the results. He criticizes CTU Pres. Karen Lewis for not leading her members by the nose.


There are times when union membership has to be led.


Looking at it from the other side, how does schools CEO Forrest Claypool and his team negotiate with a union bargaining committee that can’t confidently speak for its members?

Brown should be asking, how the CTU membership can trust anything Claypool says or does? Remember, teachers and staff will have to live with this contract for the next four years. If Rahm doesn't want another strike, which would be another coffin nail in his political future, he'll have to come back with a better offer.