Taking the fight right to Urban Prep's board. 'Bring the fired teachers back!' 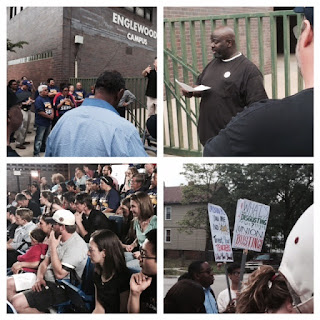 It's been tough sledding for union organizers trying to help Chicago charter school teachers win collective bargaining rights. Even though charter schools were originally created by union teachers, state laws were soon passed barring charter teachers from joining their public school colleagues in the same union or local bargaining unit. This forced the union to start organizing efforts as the Alliance of Chicago Teachers and Staff (Chicago ACTS). Over the last five years, ACTS has led several successful organizing drives.

Privately-run, publicly-funded charters and their corporate-dominated boards and lobbyists have spent millions of their education dollars relentlessly fighting unionization. One of their most common legal arguments is that since their teachers are paid by private operating companies, charter teachers are not really public employees and therefore cannot unionize simply by a majority sign-up or card-check. Nationally, there are more than 4,000 charters, each with their own private board or network organization. This creates a daunting task for the unions, having to win agreements with each board school-by-school. 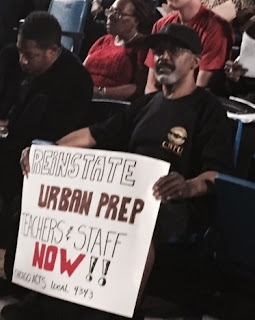 Charter operators have also used tactics of threats, harassment, intimidation and firings of even their best teachers to undermine organizing efforts. I'll go out on a limb here and say that privately-run charters have now become the center of union-busting efforts.

The irony hits you when you see dozens of charters named after people like the great union leaders, Cesar Chavez or Dr. King, who gave his very life while defending the union rights of public employees in Memphis.

Here in Chicago, eyes are on the successful organizing drive at highly-touted Urban Prep Academies where a majority of teachers recently voted to unionize and be represented by ACTS. But so far, Urban Prep's board has refused to recognize the union or negotiate a contract. Worse, they just illegally fired 16 teachers and staff, including several who have be actively supporting the union drive.

Yesterday I joined a rally outside the UP board meeting with more than 100 teachers, parents and students chanting, "Bring them back!" and "Union busting is disgusting!" Then we marched into the meeting where we made our voices heard in support of those who were fired. Board members, including Urban Prep founder Tim King sat stony faced and unresponsive while speaker after speaker came up to the microphone and voiced support for the fired teachers.

I think part of the reason King and the board are so union resistant is that contract negotiations require a higher degree of transparency and the school has been anything but transparent in response to questions about its overblown success claims or finances.

Samuel Adams, an eight-year veteran, one of the fired UP teachers, spoke at the rally as well as inside the meeting directly to the board. Adams said teachers at Urban Prep have an interest in communicating with the board and felt the union would help them get their voice heard. It would promote change, he told the board.


“It seems that when we brought these changes to you, that those teachers who brought those changes were let go,” said Adams.


“The campaign is over. The teachers chose a union. You had ample time to make your call,” Harris told the board. “How is firing all these teachers negotiating in good faith? The Urban Prep creed says we choose to live honestly. Live honestly. Reinstate the teachers.”

Shoneice Reynolds, whose son will be a senior, said two of the fired teachers helped her son transition from elementary school to Urban Prep, providing constant emotional and academic support.

Several students also gave testimony about how their now-fired teachers had helped them turn their lives around and get them plugged into school.

Knowing how Tim King has responded in the past, I doubt that he and the board will willingly agree to a contract or bring back the fired teachers. It will most likely take legal action by the union and more protests.

*Be sure a read Jennifer Berkshire's (Edushyster) account of what happened when teachers confronted a union-busting charter CEO at the recent National Charter Schools Conference in New Orleans?
Posted by Mike Klonsky at 6:39 AM