Perfect timing. As we head into the Christmas season in the land of high heating bills, comes the news that  Rahm is laying off many of the city's library custodians.

He's also put 300 union custodians's jobs on the chopping block at O’Hare Airport because of a controversial $99 million, non-union janitorial contract he's handed out to one of his mobster friends, Richard Simon, a buddy of  the son of the late mobster William “Potatoes” Daddano (stay with me now) who also happens to be connected to the UNO charter school hustlers.

According to the Sun-Times report, UNO’s non-union janitorial service is listed as an “anticipated” sub-contractor on the O’Hare deal — an arrangement that could have been worth almost $5 million, according to city records.

Charter schools, airport contracts, we always get our cut, says UNO boss and bag man for the machine, Juan Rangel. He tells the S-T that  his janitorial firm "does not have a deal with United Maintenance and hopes only to conduct “outreach” efforts to help the new city contractor find workers." Very funny. 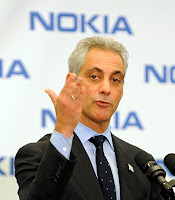 Ben Joravsky, as usual, tears the jobs-creator mask off of the mayor in his latest Reader post, "Rahm's addition-by-subtraction approach to jobs."

In the meantime, the real problem of economic development in Chicago is that the new jobs the mayor brags about are not being filled by people who live in the communities that need them the most. Meanwhile, the mayor replaces union jobs that bring much-needed money to hard-hit communities with low-wage, part-time ones. I'd love to hear the mayor give a speech explaining how this is a good economic development strategy for Chicago.

According to the report, over 80 percent of schools affected by closings had a student body that was overwhelmingly made up by people of color. CTU says that "the policy of closing schools in one area of the city and opening schools in another has been the failed status quo in Chicago for nearly 20 years."
Posted by Mike Klonsky at 11:57 AM