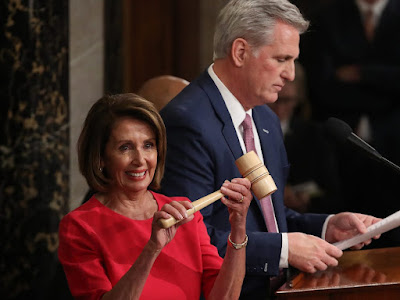 Against the backdrop of the Jan. 6 riot and with Delta sweeping the unvaxed part of the country, voting rights under attack, and millions threatened with eviction, House leaders are keeping busy playing Whack-a-Mole with each other.

A war of words between the two party leaders escalated when McCarthy joined other Republicans in vehemently protesting a mask mandate the Capitol physician reimposed and Pelosi supported.

McCarthy went on to say that, should the GOP manage to flip the House in 2022 and if he were to become the speaker, he would find it difficult to resist hitting Pelosi with the speaker's gavel.

"It will be hard not to hit her with it but I will bang it down," McCarthy said.

I call this bipartisan foreplay.